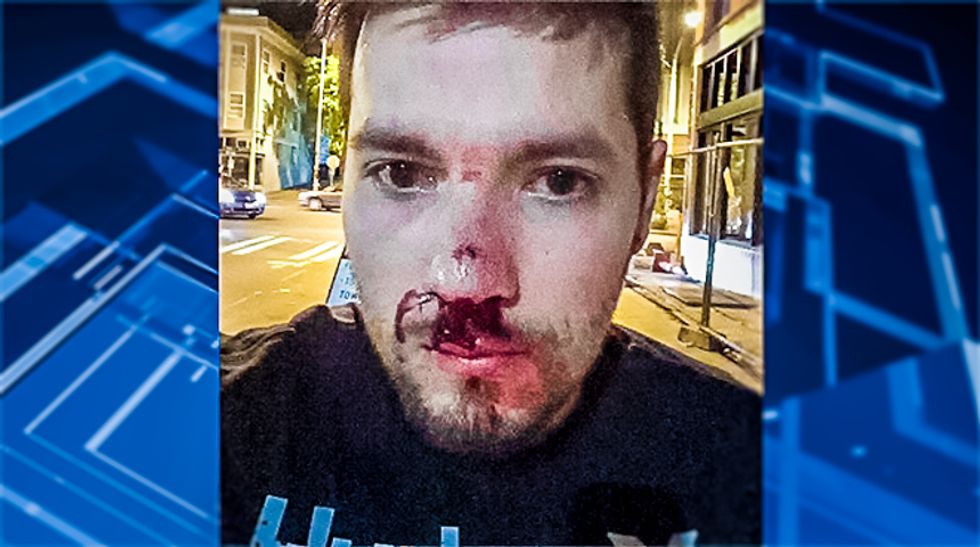 A gay couple said that they were attacked by a group yelling homophobic slurs while attending a Pride event in Seattle on Sunday.

Stevens Briggs and Patrick Dettling told KOMO that they were still celebrating the U.S. Supreme Court's decision that effectively legalized same-sex marriage nationwide when they were approached by three men and two women.

"And the guy comes up behind him, raises his hand above his head and then just smacks [Patrick's] hand," Briggs recalled. "I said 'Why did you do that? And he was like 'I was just high fiving you.' And I said 'That wasn't a high five.' And that's when things escalated."

According to Dettling, one of the attackers yelled a homophobic slur as he was punched in the face.

Briggs said that incident intensified into an an all-out brawl after he tackled one of the attackers. Two of the other men joined in, punching Briggs in the face and kicking him, he said.

Eventually the group fled, and Briggs tried to pursue but he was unable to catch them.

"It's kinda made me regress back a little bit… regress backwards in my progress of feeling comfortable with who I am. I feel like I've been pushed back a step," Dettling lamented.

Dettling explained that he had a broken nose, cuts, bruises and other injuries. Briggs had his tooth knocked out. The couple, who had been together for eight years, spent five hours at the hospital, and could now face thousands in medical bills.

But they said they were determined to return to the Pride event later that evening.

"[Briggs] said 'No, we shouldn't let them get to us. We should come up here and do what we originally planned, which was to enjoy Pride.' And I said 'Okay, well… that's a good argument. I kind of agree with that.'" Dettling noted.

"People have this idea now that same sex marriage has been legalized," he added. "They must think with marriage comes everything. You know, that all the ignorance and intolerance goes away and it doesn't."

Seattle police confirmed that that the incident was under investigation.