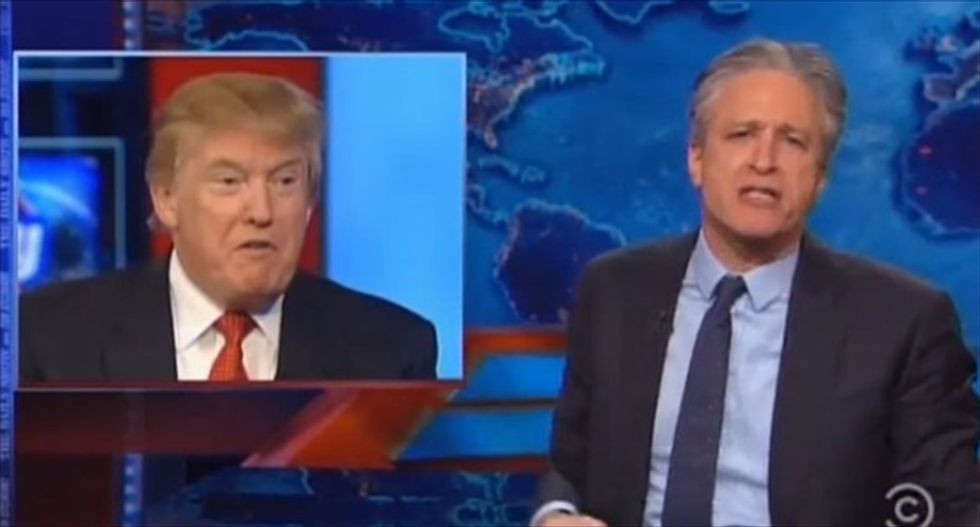 "Your problem is bald-faced, out-in-the-open, common-sense experience," Stewart said. "That's why you're not gonna win the marriage equality fight."

Specifically, Donald Trump's experience. Stewart illustrated his point by showing footage of Trump being forced to concede that same-sex couples would have a point if they asked him what was so "traditional" about being married three times.

"Yes they do. That's the point," Stewart explained. "You're not gonna win the marriage equality fight because even a man who pathologically disposed to not understand other people's points of view -- unless it is also labeled 'Trump' -- even he gets it."

Stewart then slipped into his impersonation of the real estate magnate to mock his attempt to explain how his business interests became too "powerful" for him to maintain his marriages.

"Wouldn't you f*ck one of my golf courses?" Stewart-as-Trump asked. "I think you would -- all 18 holes, and come back for more."

The host also poked fun at Sen. Ted Cruz's calling the Supreme Court decisions regarding both marriage equality and the Affordable Care Act "some of the darkest 24 hours in our nation's history."

"Truly, Voldemort has risen," Stewart intoned. "And the living will envy the dead. What is your worldview?"