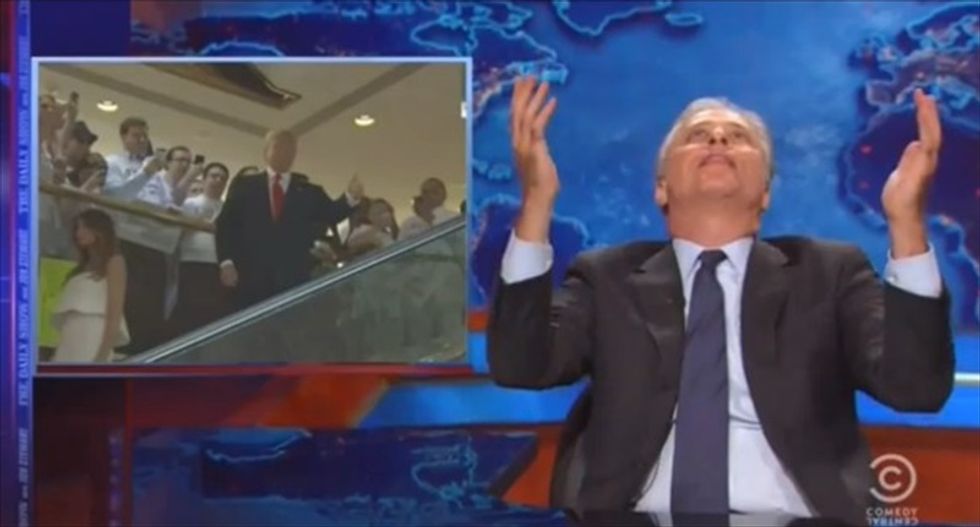 Daily Show host Jon Stewart was visibly giddy on Tuesday after getting confirmation that Donald Trump -- "F*ckface Von Clownstick" himself -- was entering the presidential race.

"Thank you, Donald Trump, for making my last six weeks my best six weeks," Stewart said. "He is putting me in some kind of comedy hospice, where all I'm getting is just straight morphine.

"I haven't seen an entrance that majestic since my friend met me at The Gap after grabbing an Orange Julius," the host quipped.

What followed, Stewart said, was a half-hour of "beautifully ridiculous jibber-jabber" from Trump that included smearing Mexico for allegedly sending drug dealers and rapists to the US while claiming "no disrespect."

"It's amazing! America's id is running for president. Trump is the part of your brain at 3 a.m. that's like, 'Let's go take a sh*t in a mailbox. Come on, who's gonna know?'"

Stewart's final show, slated for Aug. 6, falls on the same night as the first GOP primary debate, which could include Trump if he stays among the top 10 Republican candidates.