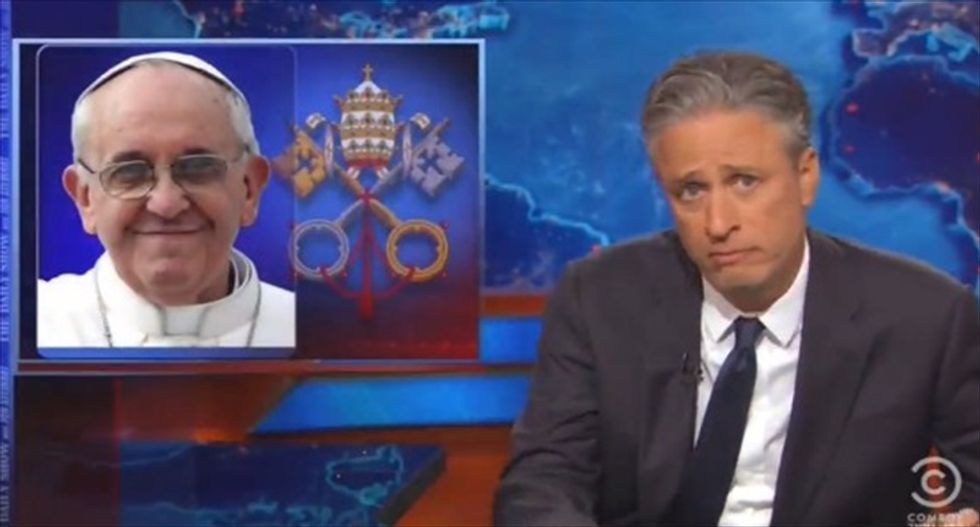 Jon Stewart needled Republicans on Thursday for trying to downplay Pope Francis' encyclical regarding global warming, saying they were arguing for separating church and state at their own convenience.

"That is his job," Stewart said of the Pope. "[His] biggest job is to tell people when they're being bad. It's why he dresses like a big wet blanket."

The Pope not only blamed climate change on human activity in the 200-page document late last week, he openly chastized "irresponsible use and abuse of the goods" on the planet, calling upon wealthy nations to do more to try to prevent "unprecedented destruction of ecosystems."

"Santorum's so Catholic he was an altar boy until like six weeks ago," Stewart said. "This guy's so Catholic, his crucifix wears a crucifix."

Instead, Santorum tried to argue that the Catholic leader was "not credible" on the issue and asking supporters to listen to scientists -- without mentioning that 97 percent of the science community agrees with the Pope.

Meanwhile, Stewart said, Jeb Bush was also being a hypocrite when he said the Pope should stick to "making us better as people."

But Bush dismissed the Pope's stance, Stewart pointed out, after he seemed to favor "church and state at least dating" during an appearance at a Faith and Freedom Coalition event in which he said goverments should respect people "taking a stand for traditional marriage."

"So there it's OK," Stewart said. "Perhaps people would be more for preventing global warming if we referred to it as 'taking a stand for preserving traditional sea levels.'"