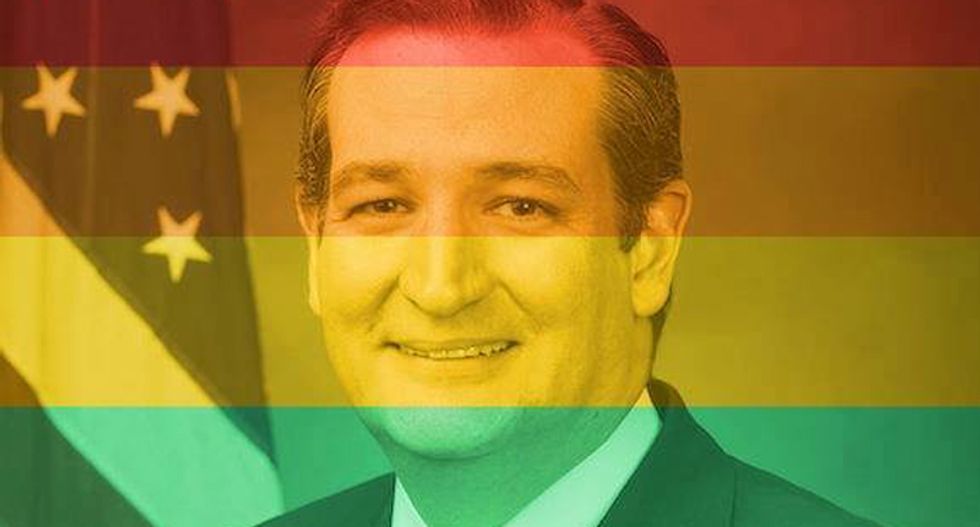 Within hours of the supreme court’s Friday decision on same-sex marriage , people with a certain number of progressively minded friends found their Facebook newsfeeds dominated by rainbow-colored profile pictures created by a special link on the website.

The gambit successfully put Facebook’s equality credentials in the spotlight. But it was challenged on Saturday at San Francisco Pride, an event the company sponsored.

The Radical Faeries, one of the more idiosyncratic groups at San Francisco’s Pride, said the festival should dump Facebook as a sponsor because of the company’s ban on adopted names.

The policy was unfair to LGBT people who use adopted names to avoid homophobia or to express their true identity, they said.

“I don’t like anybody telling me who I am or have to be,” said Storm Arcana, 42, seated on a rug in the Faerie Freedom Village, a colourful camp near city hall.

“That’s anathema to my essence. I’m self-defined and self-described and that is my right.” He objected to Facebook sponsoring Pride. “There’s too much of a contrast between what they represent and what we represent.”

The #MyNameIs organization has been fighting for Facebook company to change its name policy. It demonstrated against it at San Francisco Pride.

The group is led by San Francisco-based drag queens but also includes domestic abuse survivors, Native Americans and other people who feel that they should be allowed to use names different from those that appear on their birth certificate. Facebook, which has met members of the group, has slightly amended its policy but insists that it distinguishes itself from other social networks by refusing to let people be anonymous.

“This policy directly harms LGBTQ people, especially transgender and queer people around the world who face daily discrimination, and use social media like Facebook to find support, build community, and express their authentic selves,” said organizer and drag queen Lil Miss Hot mess in a statement.

“Facebook may seem like a trivial waste of time, but for trans people and LGBTQ youth who face disproportionate rates of violence and suicide, it can literally be a lifeline.”

The #MyNameIs group tried to ban Facebook from the parade with an online petition that collected more than 2,500 signatures. Facebook did not respond to requests for comment.

But the company remained as a sponsor, to the dismay of the #MyNameIs organizers and the Radical Faeries, a group which blends counter-cultural values, queer consciousness and spirituality.

Many members said they had been expelled from Facebook because they could not supply documentation to prove their adopted names were real.

Lovely Day, a 48-year-old woman who adopted that name six years ago, said Facebook suspended her account on Christmas Day, saying she needed to prove its authenticity. The suspension came soon after she posted videos of controversial police shootings, prompting her suspicion that trolls who disliked her viewpoint alerted Facebook.

She lamented that the company was a festival sponsor.

“I’m not really into it but I can’t change what corporate dollars do,” she said.

Day had a consolation: she is still able to use a Facebook account registered as Bobbi Terri, the names of two plastic trans dolls she takes on trips.

Other Faeries accused the tech giant of wanting to use only names that appeared on credit cards in order to monetize data.

Stellara Solanum, 31, bristled that he must his birth name, Kevin Faulkner, on Facebook even though friends know him as Stellara, which he considers more meaningful.

“My housemate spent a lot more getting to know me before naming me than my parents did,” he said.

Solanum said he now struggled to recognise friends on Facebook because they were obliged to use birth names which he did not recognise.

“Now it’s, who the hell is John Stone? It’s disconnecting me.”

The problem was gravest for queers facing homophobic threats, and native Americans, he said, adding: “They’re the ones I feel sorry for.”

On Saturday, a former Facebook employee wrote on Medium that her profile was suspended because she goes by a name different from the one she was born with. She said the ban happened while she was at trans pride on Friday, the day the supreme court announced that same-sex marriage is legal in every US state.

“If you’re a marginalised person, such as a trans person, you may be left with no way to get back on,” she wrote.

“Facebook have handed an enormous hammer to those who would like to silence us, and time after time I see that hammer coming down on trans women who have just stepped out of line by suggesting that perhaps we’re being mistreated.”