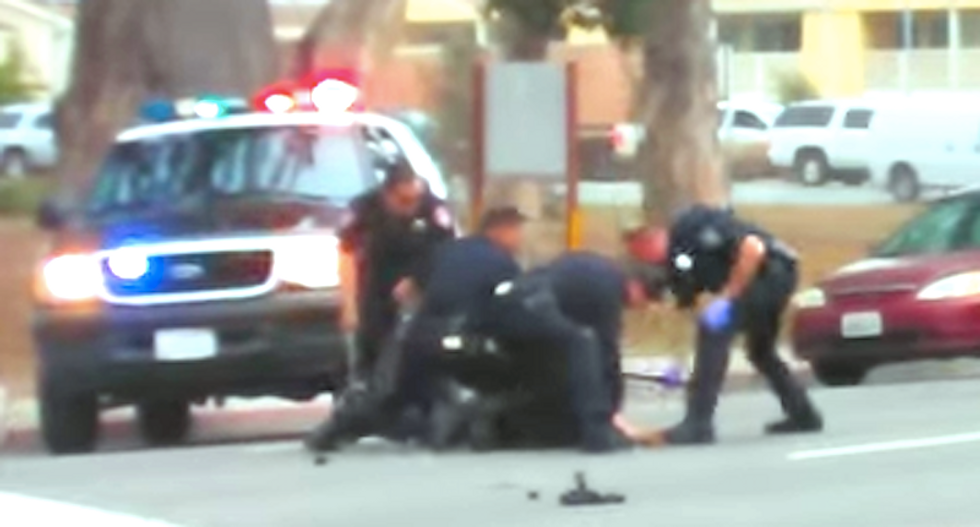 Police officers in California beat a mentally ill man with batons and shocked him with Tasers as he lay in the middle of a street.

The man’s mother said she called Salinas police in Salinas shortly after 7 p.m. Friday because her son, Jose Velasco, was running into traffic.

Witnesses said he was also screaming and jumping onto cars.

Police arrived a short time later and said they found the 28-year-old Velasco attempting to push his mother into oncoming traffic, but the man’s sister disputed those claims.

"He didn't try to kill my mom -- she walked away just fine," said sister Antoinette Ramirez.

Ramirez commented on a video recorded by a bystander that shows officers repeatedly striking Velasco with batons and using Tasers to subdue him, even after he appears to be subdued.

Police said Velasco resisted and then attacked when they attempted to pull him away from his mother.

They said he attempted to grab an officer’s Taser, and officers shocked him twice but he continued to resist.

At least three officers struck Velasco with their batons as they held him down, but police said the man kept his hands under his body and refused to show them.

One officer walks up as Velasco was held down by several officers and repeatedly strikes him with a baton, and police said they would review whether those blows were justified.

"They used batons to subdue him," said Spencer Critchley, a spokesman for the police department. "It's the behavior in the moment that needs to be controlled. They were using force because they judge him to be a threat (and) they hit him until he stops resisting."

Velasco was taken to an area hospital for treatment, and police said he attacked an officer and paramedic during the ambulance ride.

Police said Velasco grabbed them through the rails of the gurney and tried to bite them, and he was “chemically restrained” at the hospital.

He was booked on several felony counts and a parole violation after his release from the hospital.

Police declined to comment on the sister’s claims that Velasco suffers from an unspecified mental illness, citing privacy laws.

"My Poor Brother,” Ramirez said. “He is mentally ill and the cops had no right to keep hitting him he was already on the floor."

John Steinbeck's 1937 novel, "Of Mice and Men" -- which depicts a mentally disabled man -- was set in Salinas.

Watch video of the incident posted online by Richard Boxing: