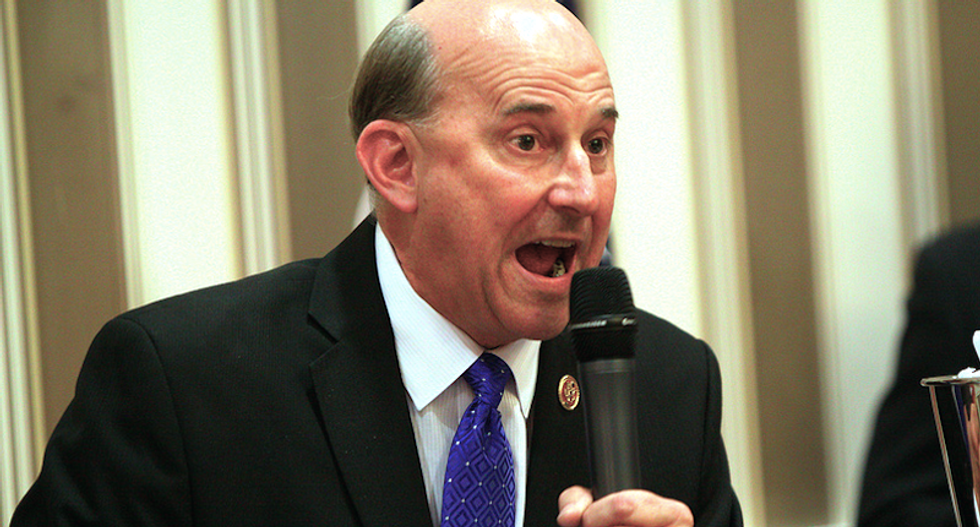 Rep. Louie Gohmert (R-TX) asked Thursday on the floor of the U.S. House whether President Barack Obama might be a terrorist.

The Tea Party lawmaker was reading quotes by Islamic extremists calling for the destruction of Israel when he made the suggestion.

“When people make clear that they are going to commit murder or genocide, how long do you have to wait before it is okay to stop them?” Gohmert said. “Well, the President has made clear it may be time to move out of the way so that these Palestinians that want to obliterate Israel can have their will.”

Gohmert, who has questioned the circumstances of the president's birth, drew on his experience as a Smith County district court judge to sketch an analogy.

“Back in my days as a felony judge, when you have somebody who is driving a car and people say, ‘Hey, we just need a ride to this location. Once we get there, we are going to murder some people, but we don't need anything from you. We just need a ride,'” Gohmert said. “The person that drove that car, knowing that those people made those comments about wanting to kill people when they get to that location, they are also guilty of murder.”

His qualifying remarks actually made more clear that he was suggesting Obama was aiding and abetting terrorists.

“I am not accusing anybody, I am raising questions,” Gohmert said. “If the United States says, ‘Here, Palestinian terrorist groups, we want to provide you the vehicle to have a powerful place right in the middle, a huge section of Israel. We want to give you that place, and you have made clear, we know you have made clear, once you are there, you are going to wipe out Israel,’ does that make the United States' leaders that facilitate that, does that make them accessories? I am just asking.”

“Mr. Speaker, you can advise the Parliamentarian, I am not accusing anybody,” he added. “I am just asking the question.”

He said the president should not side with anyone threatening genocide or murder -- which he claimed the Palestinians were.

"Netanyahu has made very clear they want peace, but how can they sit down with people who will not even acknowledge they have a right to exist?" Gohmert said. "That is not a precondition -- that is a condition for wiping them off the map as a threat to mankind if they are not willing to recognize that genocide is inappropriate."