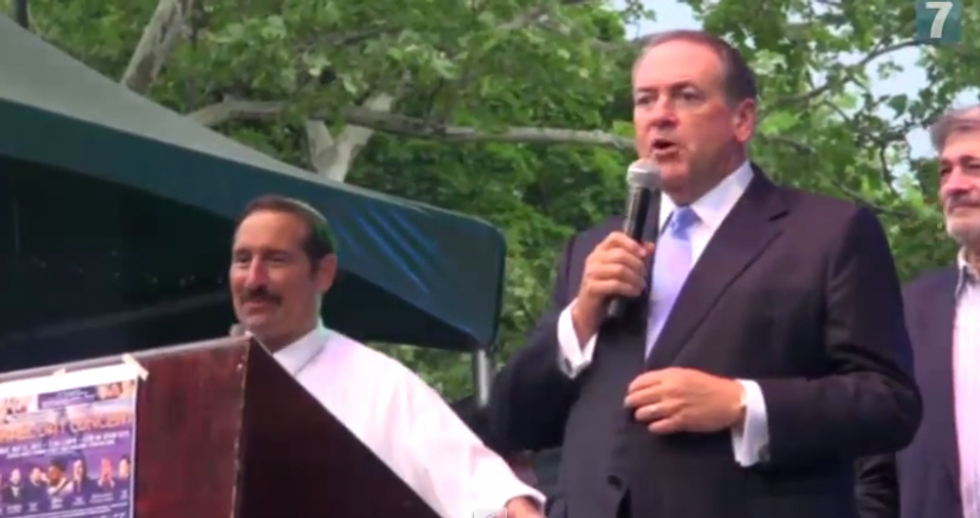 Mike Huckabee speaks in Central Park at the Israel Day Concert on May 31, 2015 (screenshot/YouTube)

In a speech in New York this weekend, Mike Huckabee told a sympathetic crowd that Israeli occupation has made life great for Palestinians, Arutz Sheva reports.

"We must educate world," Huckabee said in his Sunday speech, "that the Israelis have done more to bring prosperity, peace, and a state of liberty to people, whether they're Jewish or not."

The former governor of Arkansas describes a visit last year to a Soda Stream factory in Judea, where he observed "600 Arabs and 500 Jews working side by side, the Arabs earning four times the amount of money they would in any place in the [Palestinian Authority]." Even still, says Huckabee, there is probably "somebody in Europe or somebody in this country sitting in some Ivy League ivory tower" questioning Israel's supreme authority.

"Tell that to Arabs who've made more than ever in their lives," Huckabee quips. He argues occupied Palestine is better off under Israeli control, because of sidewalks, hospitals, and schools that Palestinians "never had before."

Huckabee says the relationship between the United States and Israel is not just a matter of "political convenience" for him, but of "personal passion." A devout Christian, Huckabee speaks of the U.S.-Israeli alliance with undertones of fire-and-brimstone, Old Testament spirituality.

"There is no explanation for Israel," Huckabee declares, "other than the hand of almighty God that has preserved and protected and given the Jews their homeland after 2,000 years of being scattered across the earth." And there is no evident reason that the United States should exist, Huckabee says, "other than the providence of God's hand."

Huckabee accuses U.S. political leaders of being more diplomatic with Iran than they are with Israel. If he becomes president, Huckabee says, he will make sure Iran will not obtain bombs and then use them to attack Israel.

A "threat to Israel is a threat to the United States," Huckabee explains. "Our liberty is threatened by the forces of radical jihad." Those who identify pressing American policy issues other than radical jihad, according to Huckabee, won't call the "enemy by its name."

Huckabee says he and people with likeminded policy views about Israel constitute a "world of sanity against the insanity." But the "existence of Israel is truly at stake," Huckabee warns. Huckabee supports keeping existing Jerusalem borders intact. Israel's boundaries are "not given by the United Nations," Huckabee says, but by "almighty God."

The United States has "no better friend" than Israel, according to Huckabee. Citizens of the two nations, he urges, should "not for one moment let our guard down." "There are forces that want to destroy every last one of us, Huckabee warns.

Arutz Shiva describes the Israel Day Concert as "a chance to soak in good music" and a way to learn more about Iran's nuclear program and how to be more active in supporting "the Jewish state."

Watch Huckabee extol the virtues of Israeli occupying forces, from a Palestinian perspective: