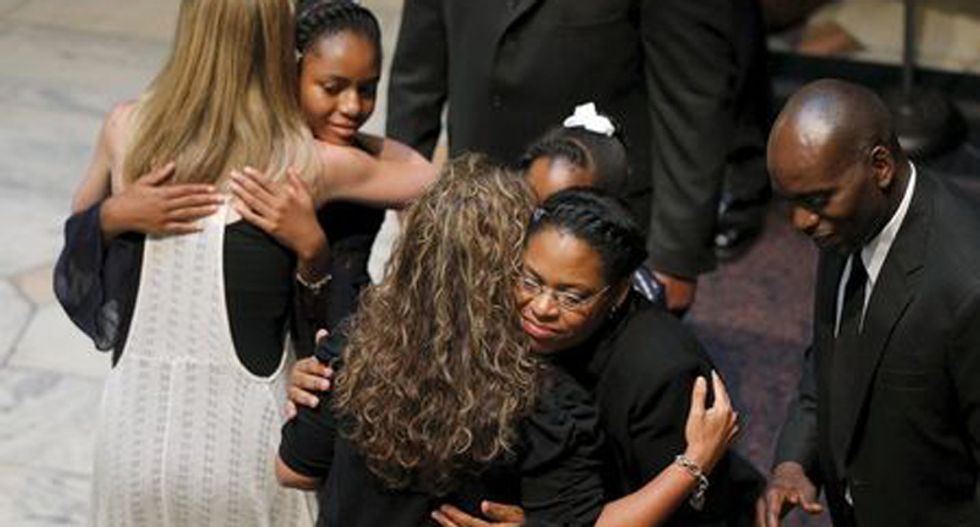 The body of Rev. Clementa Pinckney, the state senator and pastor gunned down with eight others at a historic black church in Charleston last week, was taken on Wednesday to the South Carolina capitol to lie in state inside the rotunda.

Governor Nikki Haley and other politicians came out onto the State House steps to pay their respects to the 41-year-old Democrat, who had been widely admired for the way he blended politics with his faith.

The pastor-politician and eight other black men and women were shot to death during Bible study at the historic Emanuel African Methodist on June 17. Dylann Roof, a 21-year-old white man, has been arrested and charged with all nine murders, which authorities have said were racially motivated.

Pinckney's funeral will be held in Charleston on Friday where President Barack Obama is due to deliver the eulogy. First lady Michelle Obama and Vice President Joe Biden are also expected to be in attendance.

It also ignited a political debate over the Civil War-era flag of the South's pro-slavery Confederacy, with mounting calls for the "Stars and Bars" to be removed from the State House grounds, among other places.

Roof had posed with a Confederate flag in photos posted on a website that also bore a racist manifesto.

Inside the rotunda, mourners filed by Pinckney's open casket and were greeted by his widow and two young daughters. In a bizarre twist, the casket was next to a statue of 19th-century South Carolina politician John C. Calhoun, a defender of slavery who was the seventh U.S. vice president.

On Tuesday, South Carolina lawmakers voted to open debate on removing the Confederate flag from the State House grounds as protesters gathered outside chanting "Take it down."

Four former South Carolina governors — three Democrats and one Republican — issued a joint statement on Wednesday supporting a call by current Governor Haley, a Republican, and other state politicians to remove the flag.

"We should fly only the United States and South Carolina flags on our State House grounds — flags that represent us all," they said.

One of the governors, Republican David Beasley, famously lost election after pushing for the flag's removal in 1996.

Pinckney, a fourth-generation pastor and talented orator with a baritone voice, chose a religious path early. He began preaching at 13, and at 23 became the youngest African-American in South Carolina history to be elected to the state legislature. He was elected to the Senate at age 27 in 2001.

Pinckney was a passionate advocate of expanding the Medicaid healthcare funding program for the poor and was credited this year with pushing through a police body camera law in the wake of the shooting of an unarmed black man by a police officer in North Charleston in April.

"He was a giant," said state Senator Marlon Kimpson, a Democrat. "He was the moral conscience of the Senate.

"We turned to him oftentimes during a legislative impasse, and he would offer us his guidance but more importantly give us his spiritual and biblical perspective."