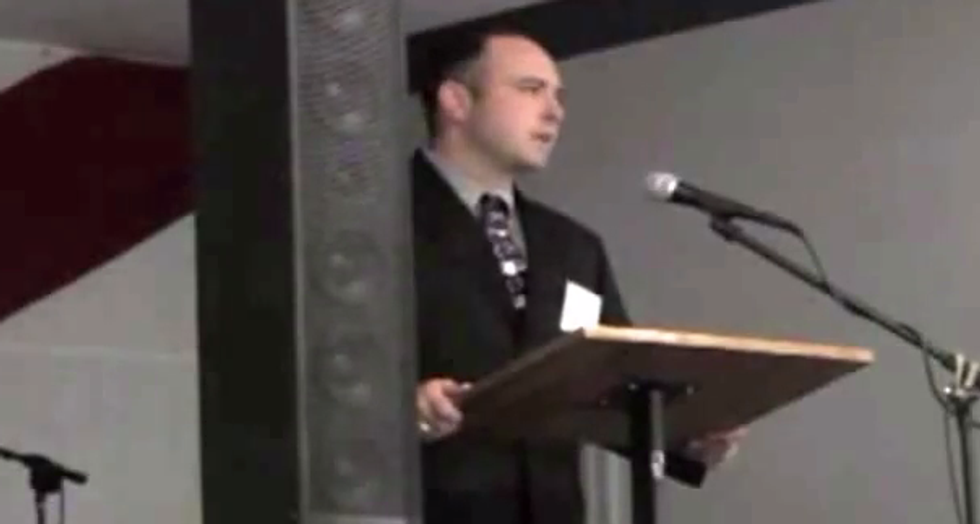 City officials in Anniston, Alabama have been aware of Lieutenant Josh Doggrell's white supremacy affiliations since at least 2009, ABC 33/40 reports.

The officer, who is still on the payroll, was placed on administrative leave Wednesday after the Southern Poverty Law Center (SPLC) published a video of Doggrell presiding over a gathering of white nationalists. On Thursday, city council members, NAACP leaders, and civil rights activists met with the police department to discuss the handling of Doggrell's suspension.

After the meeting, city council member David Reddick told ABC 33/40 reporters outside that leaders in Anniston have known Doggrell runs the local League of the South (LOS) chapter for years.

Reddick provided ABC 33/40 with emails dating back to 2009 showing the local press, the city manager, the city attorney, and other administrators were fully aware that Doggrell had founded a regional white supremacy organization. The city attorney appeared concerned about a statement of Doggrell's that he considered the "hate group" label -- which the SPLC applies to the LOS -- a "badge of honor."

"Nothing was done," Reddick tells ABC 33/40. "I think it's time we actually do something, make a stand."

"I think it's unfortunate that an outside organization," Reddick continues, referring to the SPLC, "had to come and help us do something about what's happening inside here. But this is one of the reasons we need to take basic diversity training, race relations training."

During a 2013 LOS meeting, footage of which the SPLC made famous this week, Doggrell bragged to fellow white supremacists that his superior officers supported and shared his Confederate sympathies.

The LOS calls for southern states to secede and establish a Christian theocratic state run by “Anglo-Celtics.” Doggrell has been a member since 1995.

"I’m not going to sell out my position with the League as something I believe in strongly," Doggrell reportedly told his chief. "If it came down to it, I’d choose the League.”

"We pretty much think like you do," Doggrell's supervisor allegedly replied.

“I do not believe that someone could be terminated solely based on their private sector membership in a properly formed legal organization,” city manager Brian Johnson told the SPLC about white supremacists serving in law enforcement, “as hateful as the KKK might be.”

As of press time, the League of the South’s website, which features a biography of Doggrell, says he has been a “peace officer in his home city/county for sixteen years.”

According to Census Bureau data, the population of Anniston, Alabama is approximately 51 percent black.

Update, 5:18 p.m. EST: The Anniston Star reported that Doggrell was fired from the department, while Brown has announced his retirement.

"Let's make it very clear that this city will not tolerate any connection to racism," Mayor Vaughn Stewart said at a press conference announcing the two officers' departures.