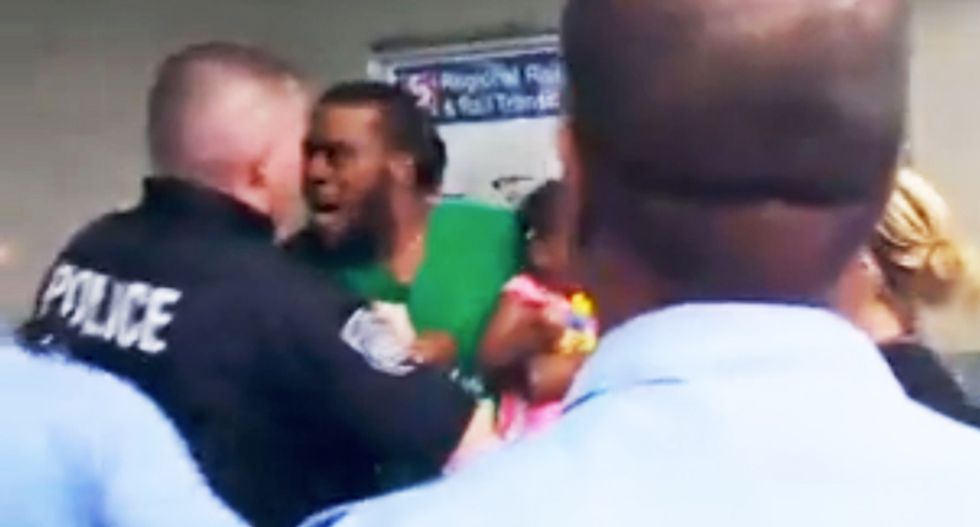 Philadelphia man struggling with police while being arrested - screencapture

Transit officers working for the Southeastern Pennsylvania Transportation Authority are under investigation after several of them were recorded by a cell phone pushing and shoving an African American man holding onto a baby for reportedly not paying his $2.25 fare.

According to WPVI, SEPTA officials say they are reviewing their policies and procedures after the video -- recorded Thursday night -- went viral, calling attention to the officer's actions.

In the video, three transit police can be seen talking to the man as he stays seated in the car holding a very small child. After another officer arrives and handcuffs the man, he is escorted off the rail car and then can be seen being shoved against the wall with the baby still in his arms.

As bystanders attempt to intervene, more than a dozen officers descend upon the platform pushing the crowd back as one man yells , "He still has his daughter in his hands!" as the baby can be heard crying in the background.

More officers arrive forming a cordon around the cops wrestling with the man and forcing bystanders onto the train and away from the struggle.

According to SEPTA Police Chief Tom Nestel, he was disturbed by his officer's actions.

"I never want a child's safety being jeopardized. This is the type of incident that causes us to reflect on what we tell our police officers and how we tell them," he said in a statement.

Watch the video below, uploaded to Facebook by Irize Refined Earth:

So, this is the bullshit my son witnessed yesterday coming home from work. Dude's crime? Not paying the $2.25 fare. Look at how small and scared his daughter is, and how he is treated by Septa & Philadelphia police, over $2.25!!! I thought Septa had a policy of allowing fareless riders the courtesy? I wish they would put hands on me while holding my kids!!! This police 'entitlement' mentality, which often leads to brutality, has got to stop!