Alabama man fired for refusing to remove Confederate flag from truck: 'It’s just my right to have it' 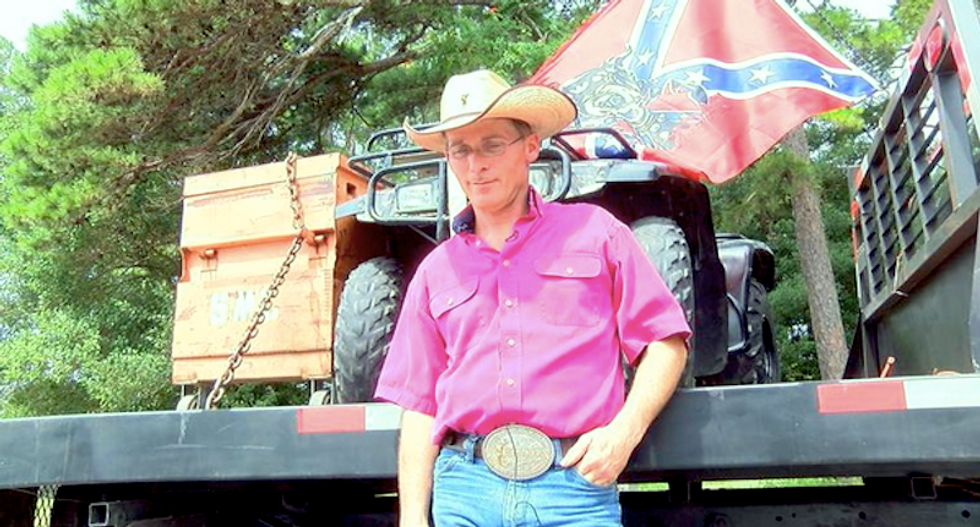 An Alabama man said his rights were violated when he was fired over a Confederate flag on his pickup truck.

Phillip Sims said he does not normally drive to work at Turner Industries with the Confederate battle flag flying from his truck, but he said was running late Monday and didn't have time to remove it, reported WHNT-TV.

Sims said a plant supervisor called him outside to discuss the flag, which he refused to remove.

Sims didn't explain why he had the flag on his flatbed pickup truck over the weekend, but he said he was glad he refused to remove it -- even if it meant losing his job.

“I’m unemployed now but I still feel that I made the right decision,” he said.

Sims said his former employer had offered three times to rehire him if he would remove the flag, but he said doing so would violate his First Amendment rights.

“It’s a statement of our heritage and it’s just my right to have it, and I don’t think that I should just give it up because somebody told me I had to,” Sims said.

He has contacted the American Civil Liberties Union in hopes that the civil rights group would take up his case, but an employment attorney said Sims doesn't have much of a claim.

"In general, Alabama is an employment-at-will state, which means employers can take action based on any reason or no reason," Mastando said.

The attorney said private employers in Alabama don't even have to explain fireable offenses in employee handbooks and are given wide latitude to make employment decisions.

"If they have a business reason for their decision to not allow Confederate flags in their parking lot or workplace, that is something they can do that won't violate any laws," Mastando told the station.

She said Sims could potentially pursue a discrimination claim under federal law, and the man said he would explore that as he seeks another job.

Another Turner Industries employee was reportedly fired Tuesday, but that employee declined to be identified by WHNT.

Turner Industries declined to comment on either case, but Sims said he had no regrets.

"It was worth it, maybe more people will start standing up and we won't have to fight so hard to just be American," Sims said.