America leads the world in treating working moms like crap 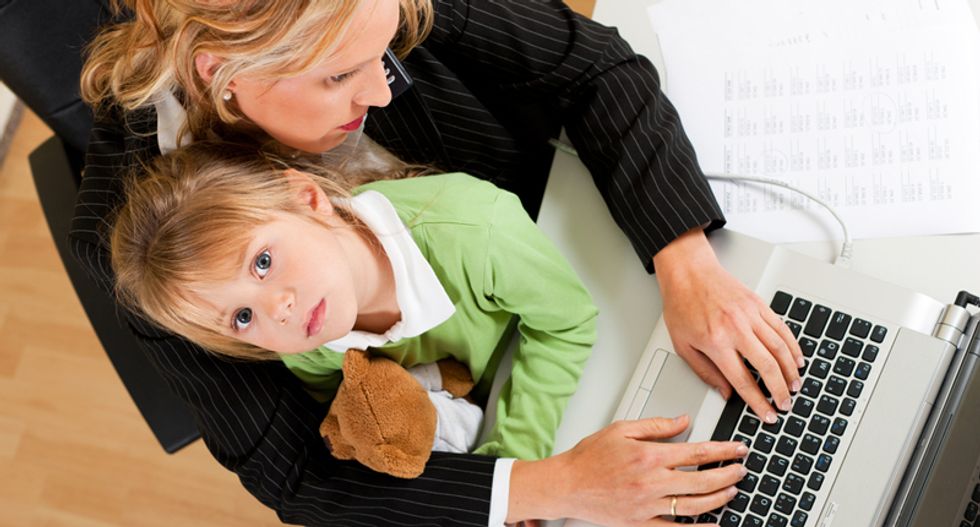 Laura Browder is the latest example of how harsh America can be on working mothers. When an employer called the Houston mother of two to meet up for a job interview, she didn’t have time to line up childcare. Browder ended up taking her 2-year-old son and 6-year-old daughter with her to the interview location, a local mall, where she kept an eye on her kids from 30 feet away.

Moments after she landed the gig, a cop arrested Browder for child abandonment. Though she was later released, the arrest was an unfriendly reminder of the tough calls moms often have to make.

“Mothers constantly have to do mental cost-benefit analysis like this,” Stacia L. Brown, founder of the blog Beyond Baby Momas, told AlterNet. “We bear the brunt of chastisement when we make tough calls like Browder did, but we can only be in one place at a time. According to her account, the children were within her line of vision the whole time they were seated in the food court. The alternative to not bringing her children to the mall so that she could interview would have been losing an opportunity to secure a livable wage for her family.”

Though Browder’s arrest was a daycare issue, it is part of a larger problem. Women make up nearly 50 percent of America’s workforce and 40 percent of household breadwinners, yet they have few of the protections mothers in other rich countries enjoy. America is the only country in the developed world that doesn’t offer guaranteed paid paternity or maternity leave to workers. Only 12 percent of U.S. workers reportedly have such coverage, but it is usually a benefit provided through employer insurance.

At least seven in 10 mothers with children younger than 18 were in the workforce in 2012, according to the Pew Research Center. Yet, America is quite hostile toward its working mothers. Kristin Rowe-Finkbeiner, executive director of momsrising.org, says part of the problem is that most policymakers can’t relate to the issues moms face. More than 80 percent of the 114th Congress is male, a figure Rowe-Finkbeiner says explains why lawmakers don’t see childcare access as an urgent issue.

“Often, childcare has been thought of as a woman’s individual problem,” she told AlterNet. “If one person can’t make it happen, then it’s her fault. We have a structural issue with childcare we have to solve together and not an epidemic of personal failing.”

(Keep in mind that racism pressures black moms like Browder even more. In New Jersey, black mothers are more likely to be deemed unfit by the state’s child services than white mothers.)

President Barack Obama acknowledged during his State of the Union speech in January that childcare costs are unaffordable for many mothers. He has proposed to triple the childcare tax credit to $3,000. It would be a welcome source of financial support. In 30 states and the District of Columbia, a mother can pay more for daycare annually than for a year of in-state tuition. Not only is childcare expensive, women aren’t earning equal paychecks. We know that women make 78 cents for every dollar a man makes, but the breakdown for working mom’s salaries are even more bleak. Sixty-five percent of households led by women are considered low-income.

But here’s another issue: employers discriminate against mothers. One study found that moms pursuing six-figure jobs could be offered salaries that are $11,000 less than female applicants who don't have children; that figure jumps to $13,000 less when compared to childless male applicants. Men don’t face such discrimination. In every state, working fathers earn more than working women. Men’s salaries increased by more than 6 percent when they had children, but women saw their salaries drop by 4 percent for each child they had, according to one study.

Brown says fear of discrimination can lead to women hiding the fact that they have children. She believes employers should become more sensitive to the reality that mothers may not be able to secure childcare during an interview.

“I think it would help if companies provided onsite childcare for employees, which could also be open to interviewees in need,” she said. “That's the dream scenario.”

Such cuts would be a mistake for several reasons. When parents don’t have affordable childcare for their children, they risk high absenteeism and lack of focus at work. Studies show the reverse happens with state-supported childcare. Rowe-Finkbeiner says America is far behind the rest of the developed world in realizing that subsidizing childcare is good for society

“This is a win for taxpayers, a win for working parents, and a win for businesses when we do have access to high-quality, affordable childcare," she said.