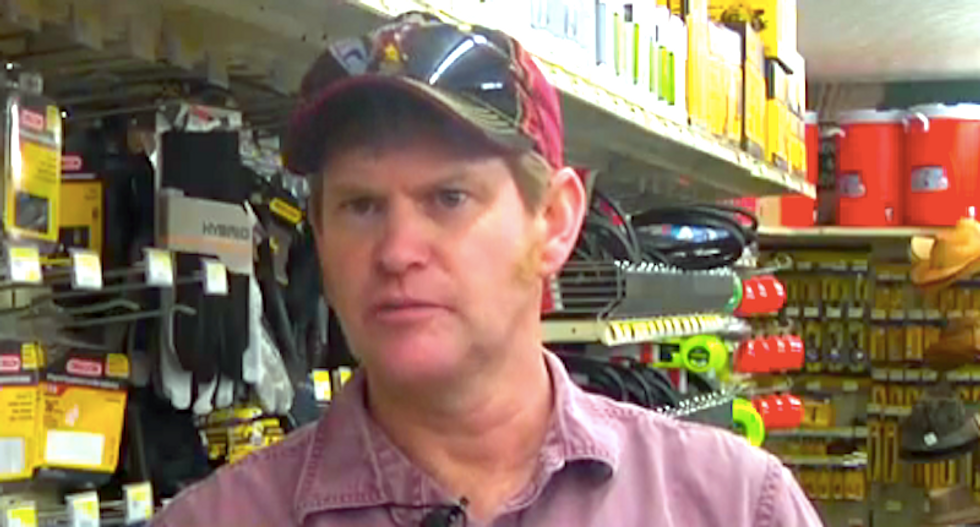 An east Tennessee pastor changed the wording on a sign banning LGBT customers from his hardware shop one day after vowing that he would never remove the placard.

Jeff Amyx, a Baptist minister who owns Amyx Hardware & Roofing Supplies in Grainger County, said he got to thinking Monday morning, after a Supreme Court ruling in favor of marriage equality, that Christians were the victim of a double standard that allowed homosexuals to stand up for their beliefs but not religious people.

"They gladly stand for what they believe in -- why can't I?” Amyx told WBLR. “They believe their way is right, I believe it's wrong -- but yet I'm going to take more persecution than them because I'm standing for what I believe in.”

So he placed a “no gays allowed” sign on the front door of his Washburn hardware store and said Monday that he would never take it down.

“A lot of people have called me and congratulated me,” Amyx told WATE-TV. “But other calls are on the other side of spectrum -- people calling and threatening me, telling me I would regret this. No, I’ll never regret this.”

However, Amyx removed the sign Tuesday and replaced it with another one bearing a revised message at the urging of friends and customers who suggested he make it “a little nicer.”

The new sign reads: “We reserve the right to refuse service to anyone who would violate our rights of freedom of speech and freedom of religion.”

Some neighbors wondered how Amyx would be able to accurately determine which customers were gay or lesbian, and the pastor admitted he might allow them to shop there anyway – with one caveat.

“Well I might preach to you a little while,” said Amyx, who insists he doesn’t hate people – only their sins.

A spokeswoman for the American Civil Liberties Union said businesses that are open to the public should not discriminate against customers based on their religious beliefs, but Amyx said he doesn’t care.