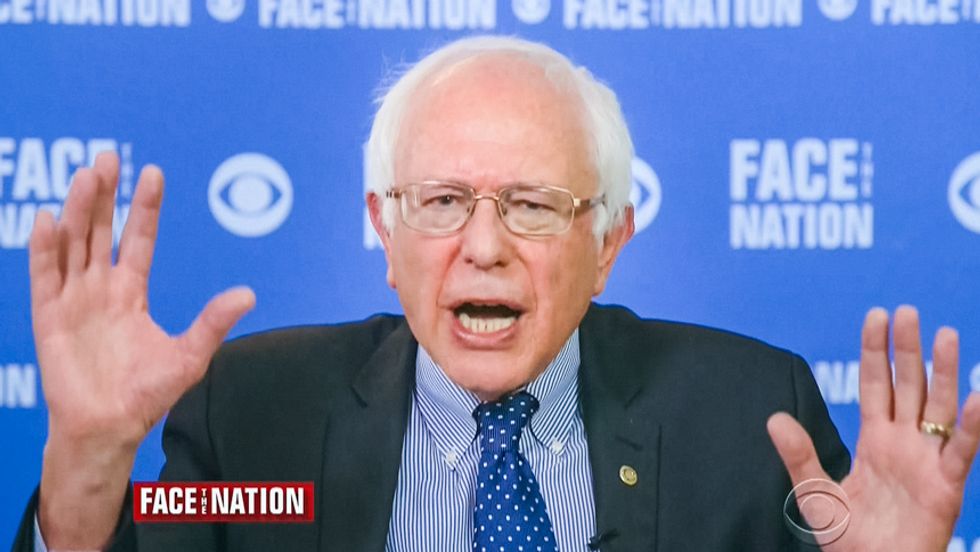 While visiting Bolivia last week, Pope Francis accused corporations which exploit cheap labor and resources for profits of pursuing "the dung of the devil." And he took a shot at governments which enacted austerity measures that cut programs for the poor.

“The new colonialism takes on different faces. At times it appears as the anonymous influence of mammon: corporations, loan agencies, certain ‘free trade’ treaties, and the imposition of measures of ‘austerity’ which always tighten the belt of workers and the poor," the pope said.

Sanders told CBS host John Dickerson that Pope Francis had highlighted the fact that "casino-type capitalism is causing devastating problems with our climate."

"In terms of wealth and income inequality, he talks about all over the world, for example, we are ignoring the needs of senior citizens who often in our country and around the world, are lonely, don't have the money they need for medicine or to heat their homes or to eat -- buy the food that they need to survive," Sander explained. "He has talked about an issue that I have talked about a lot, and that is young people around the world, in our country today, we have youth unemployment for white kids who graduate high school at 33 percent; Hispanic kids: 36 percent; African-American kids: 51 percent."

"And what the pope is saying, there's something wrong internationally, where almost all of the new wealth in this world is going to people on the top and so many other people are falling by the wayside."

The candidate argued that the pope had finally said "enough is enough."

"Money cannot be the God of life," Sanders insisted. "We have got to look at our kids, look at those people who are hurting. We've got to come together to create a new world. And not a world in which a handful of people have so much wealth and so many other people are suffering."

"I am a great fan of Pope Francis," he concluded.