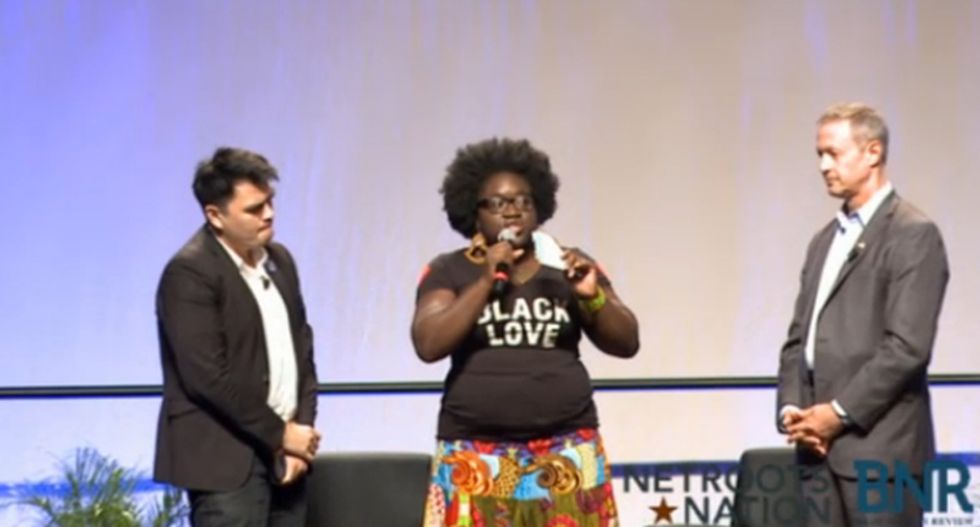 A townhall-style talk at Netroots Nation with Democratic presidential aspirants Martin O'Malley and Bernie Sanders was disrupted midstream by protesters from the #BlackLivesMatter movement demanding the candidate put forward a plan to fight structural racism.

Local Phoenix activist Tia Oso took the stage and welcomed O'Malley to Phoenix before noting that the #BlackLivesMatter movement -- born out of the deaths of Michael Brown in Ferguson, Missouri, and Eric Garner in New York-- came into being two years ago on July 13.

"Will you put forward a racial justice agenda that will dismantle, not reform, not make progress, but will begin to dismantle the  structural racism in the United States?" Oso asked the candidate.

O'Malley eventually got around to addressing the crowd, speaking about police reform but the candidate seemed caught off-guard by the protest.

Bernie Sanders was also disrupted, telling the protesters, “Of course black lives matter,” before adding “I’ve fought for civil rights for fifty years, but if you don’t want me to be here, that’s okay.”

He later stated that black people are dying in America because, "We have a criminal justice system that is out of control."

Watch the video below from Five Steps Forward. Protesters begin at about the 40-minute mark:

With today’s Town Hall, our aim was to give presidential candidates a chance to respond to the issues facing the many diverse communities represented here.

Although we wish the candidates had more time to respond to the issues, what happened today is reflective of an urgent moment that America is facing today.

In 2016, we’re heading to St. Louis. We plan to work with activists there just as we did in Phoenix with local leaders, including the #BlackLivesMatter movement, to amplify issues like racial profiling and police brutality in a major way.

It is necessary and vital to continue this conversation. We look forward to doing so in the coming year.