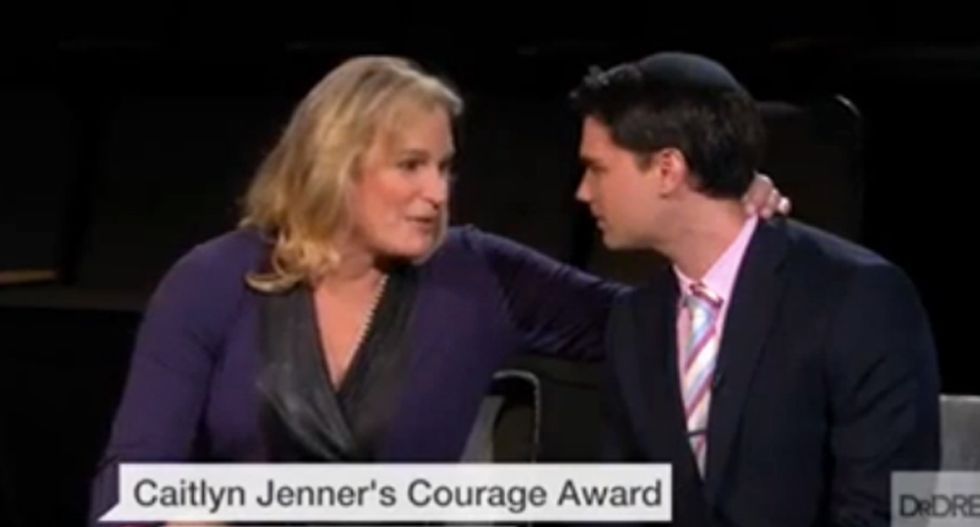 Breitbart.com editor Ben Shapiro is apparently still reeling from his humiliating on-camera run-in with transgender Inside Edition reporter Zoey Tur, saying that the trans woman threatened him and that he feels harassed and unsafe.

On Thursday, Breitbart's Daniel Nussbaum published a post accusing Tur of "tripling down" on her threats against Shapiro, who filed a police report after Tur responded to Shapiro's aggressive misgendering and questioning of her mental health by telling him to pipe down or go home "in an ambulance."

In the post, Nussbaum wailed, "Transgender Inside Edition reporter Zoey Tur tripled down Tuesday on threats he made against Breitbart Senior Editor-at-Large Ben Shapiro during a Dr. Drew-hosted panel on HLN last week."

During the original panel, Shapiro was calling trans people mentally ill and claiming that to refer to Caitlyn Jenner or Tur as “women” was to deny their genetics.

“What are your genetics, sir?” Shapiro sneered at Tur.

Tur gently laid a hand across Shapiro's shoulders and said, "You cut that out now, or you’ll go home in an ambulance.”

On this basis, Shapiro filed battery charges against the reporter. He further claims that after the taping, Tur frightened him by saying, "I'll see you in the parking lot."

Now, pointing to an interview that Tur gave to KFI AM 640’s Bill Carroll, Nussbaum claims that Tur is making further threats against Shapiro's safety.

Carroll asked Tur if she was threatening Shapiro during the Dr. Drew panel.

Shapiro says he filed the suit to teach "the left" a lesson.

“Just because the left has designated someone a member of the victim class does not mean that that person gets to infringe the rights of others,” he said. “Until the left learns that, their aggression will not stop.”

Shapiro has continued to whine and complain about the encounter on the social medium Twitter.

Because unacceptable behavior magically becomes acceptable so long as you're on the left's approved list. https://t.co/WG8e12TOUD
— Ben Shapiro (@Ben Shapiro) 1437605895.0