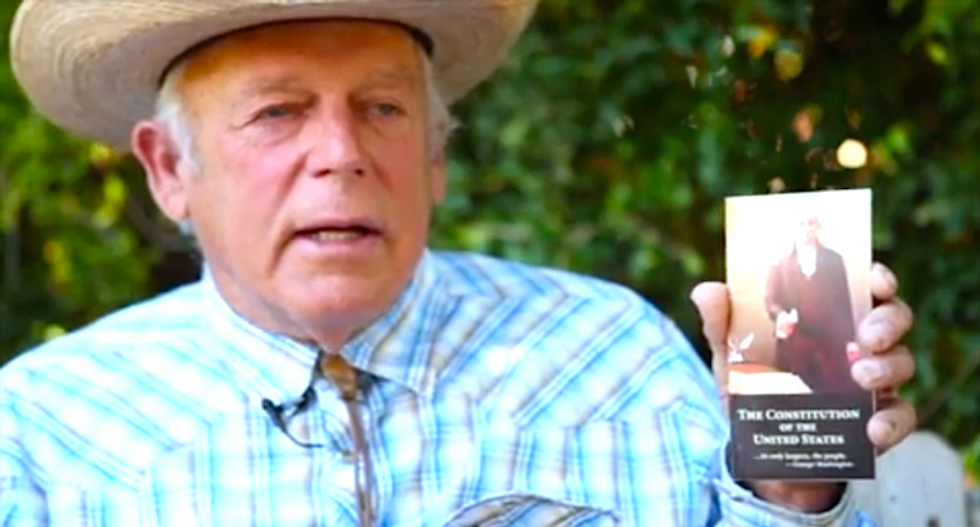 Scofflaw rancher Cliven Bundy said he met with Sen. Rand Paul (R-KY) for nearly an hour this week and found he sees eye to eye with the GOP presidential candidate.

Bundy, whose ongoing dispute over grazing rights on federally owned land sparked an armed militia standoff last year with the Bureau of Land Management, said Paul assured him he would grant the rancher’s demands and make Nevada a sovereign state if elected next year to the White House.

"He said, 'One of your biggest problems is getting Nevada to recognize its sovereignty and to stand up for its sovereignty," Bundy told KNPR-FM. "He said he would turn over the jurisdiction authority and allow the state of Nevada to act like a sovereign state. He said it would be up to we the people to govern ourselves."

Bundy, who views often square with the far-right sovereign citizen and posse comitatus movements, has said he would be willing to pay the $1 million he owes for grazing his cattle on public land to Nevada – but not to the federal government, whose authority he does not recognize.

The rancher said Paul’s campaign staff escorted him to an impromptu meeting with the candidate after Bundy attended an event in Mesquite.

A spokesman for the Paul campaign said he took part in no scheduled meetings during the appearance, and he said the candidate did not speak to anyone for as long as 45 minutes – as Bundy claimed.

Paul said during the campaign event that he believed all land issues – including endangered species protections – should be handled by the states and not the federal government.

Bundy said the candidate expressed an appreciation for the American Lands Council – a Koch brothers-funded group that is working to give states control over federally owned land through legislation and litigation.

That’s the wrong approach, according to Bundy – who believes that states already own the land and hold sovereignty over its use.

“I don’t want to sell this land to private ownership, because I believe I already have stewardship,” he said. “I don’t claim ownership -- I claim rights.”

Bundy said he explained his point of view to Paul, and he said the candidate expressed agreement.

“I don’t think he really understood how land rights really work in the western United States,” Bundy said. “I was happy to be able to sort of teach him.”

Republican lawmakers and conservative media supported Bundy during the armed standoff with federal agents, but most of his mainstream support dried up after the rancher argued that black people might have been better off as slaves.