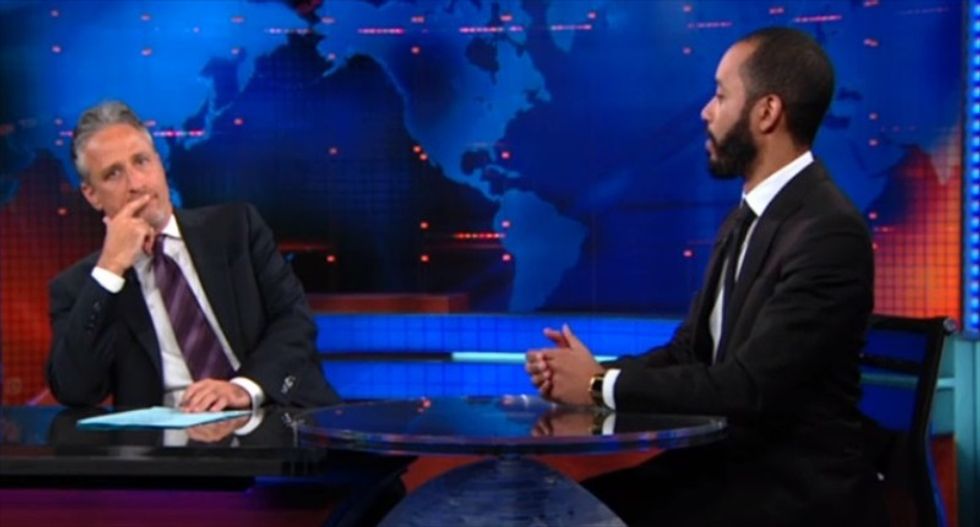 Cenac's concern stemmed from a June 2011 segment in which the host impersonated Cain for saying that if elected, he would not allow legislation that was more than three pages long.

"If I am president, treaties will have to fit on the back of a cereal box," Stewart said at the time. From now on, the State of the Union address will be delivered in the form of a fortune cookie. I am Herman Cain and I do not like to read."

The impersonation also featured Stewart speaking in-character as former Minnesota Gov. Tim Pawlenty, and can be seen in full below.

Cain and Fox News later accused Stewart of mocking him because of his race, prompting the host to respond with a compilation of various other character voices.

Cenac said he was also concerned that Stewart's take on Cain's voice resembled the Amos & Andy character George "Kingfish" Stevens, which generated protests from African-Americans concerned that the character perpetuated stereotypes. A segment featuring Kingfish, as played by Tim Moore, can be seen here:

Cenac, the show's only black writer at the time, told Maron that he was not present when the Cain segment was produced, but watched it as it aired and thought it came from "a naive, ignorant place" rather than one of maliciousness. But when he raised the issue at a writers' meeting later, Stewart got "incredibly defensive."

"I remember he was like, 'What are you trying to say? There's a tone in your voice,'" Cenac said "I was like, 'There's no tone. It bothered me. It sounded like Kingfish.'"

After getting cursed out by Stewart, Cenac said, he left the studio and cried to himself on a nearby baseball field.

"I gotta be honest if something seems questionable, because if not, then I don't want to be in a position where I am being untrue not just to myself but to my culture, because that's exploitative," he explained. "I'm just allowing something to continue if I'm just going to go along with it. And sadly, I think that's the burden a lot of people have to have when you are 'the one.' You represent something bigger than yourself whether you want to or not."