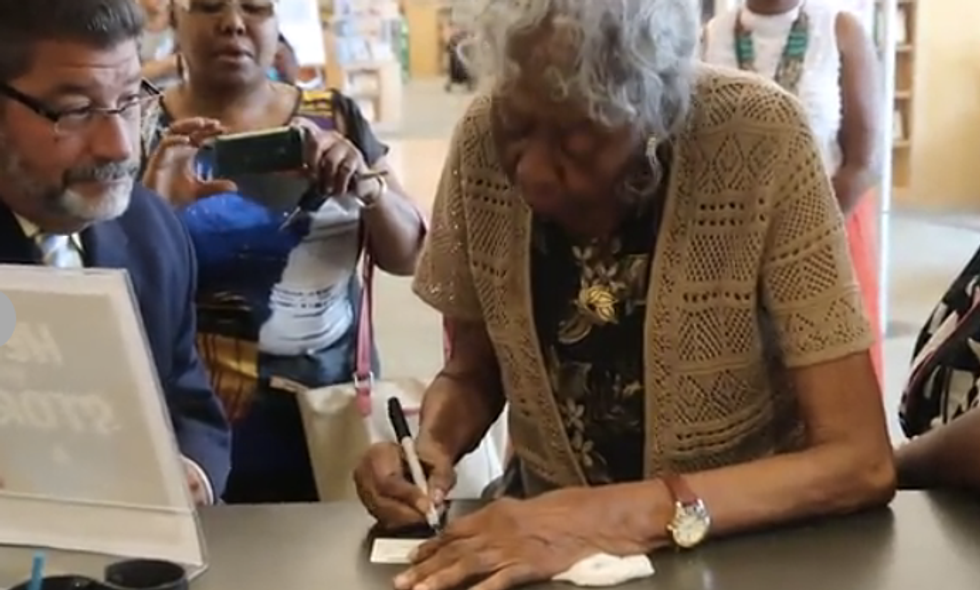 A 92-year-old woman who lives in Cincinnati, Ohio has finally gotten a library card, after being denied it 73 years years ago because she is black, the News & Observer reports.

As a student at Shaw University in 1942, Pearl Thompson went to a public library in Raleigh, North Carolina to check out a history book. Staff forbade Thompson from taking any reading materials off the premises. To the extent Thomas wanted to study, library employees told her to read in the basement. But, according to Thompson, librarians explicitly said she could not take books home with her.

On Thursday, Thompson went back to the North Carolina institution that once denied her equal reading rights and finally got her library card -- more than seven decades later.

Before she signed up for her card, Thompson tearfully told library staff and local media -- who had gathered for the occasion -- that being prevented from checking out books had motivated her to teach children to read.

"I was determined that when I became a teacher every child would have an opportunity to learn to read," Thompson said, before describing the literacy work she had done with a kid who has Down syndrome.

"I'll take my card now," Thompson announced, before signing her name on the library card application she hadn't been eligible to fill out decades earlier -- because of the color of her skin.

According to a report from Vice's David Gilbert, a Trump-supporting Tulsa pastor attempting to take on Oklahoma incumbent Sen. James Lankford (R) tried to take page from the conservative internet trolling playbook and get himself banned on Twitter to garner attention for his dying campaign.

Less than one week after the January 6 insurrection House Republican Minority Leader Kevin McCarthy was interviewed by a local California radio station and revealed that President Donald Trump admitted to bearing “some responsibility” for the violent and deadly attack on the U.S. Capitol.

“I say he has responsibility,” McCarthy told KERN on January 12, 2021, as CNN’s K-FILE reports, calling it “a little-noticed local radio interview.”