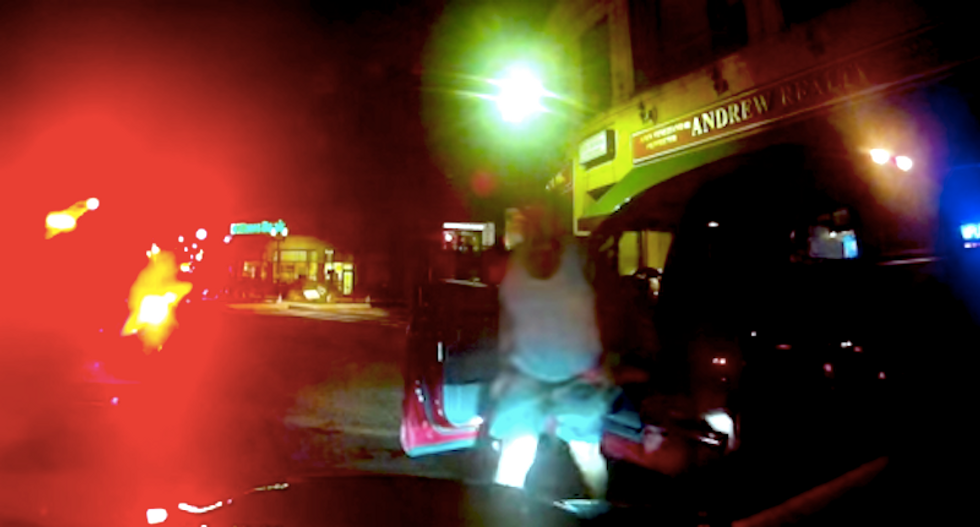 A Massachusetts police detective was placed on administrative leave Monday after a motorist posted video online of the officer repeatedly threatening to shoot him during a traffic stop.

The driver, whose name was not released, posted video from the encounter early Sunday in Medford, where the off-duty officer angrily confronted him after the man drove through a rotary without stopping, reported WCVB-TV.

A camera mounted on the driver's dashboard captures the confrontation, which begins when a pickup truck pulls alongside the motorist and the off-duty officer jumps out.

"Hey yo, you want to fight, buddy?" the driver asks, and the officer approaches in a sleeveless T-shirt and shorts.

The driver throws his vehicle into reverse, and the officer reaches into his pocket and continues to approach -- as he repeatedly yells threats.

"I'll put a bullet hole right through your f*cking head," the officer says, before the driver apparently notices that he is holding a badge and stops his car. "You're lucky I'm a cop or I'd beat the f*cking piss out of you right now."

The video displays an inaccurate time stamp from July 28, although it was actually recorded two days earlier.

The driver tells the off-duty detective, later identified as Stephen Lebert, he did not realize at first he was a police officer and warns him that he is recording dashcam video.

Lebert tells the driver he will seize the camera as evidence of a head-on collision he nearly caused by driving into the rotary without stopping, and the driver apologizes and says he did not see a sign marking the traffic circle.

The detective calls in on-duty police officers, and the driver tries to explain why he initially reversed to drive away from Lebert.

"He was super aggressive at me, he was yelling and he jumped out of his truck and he yells that he's going to blow my brains out, and so I got scared," the driver says. "I threw it in reverse, I'm like, What the hell's going on -- I don't know this guy, you know. He's got tattoos, he's got a wife-beater. Where I'm from -- I grew up in Lowell, Massachusetts -- that's a rough area. When someone says they've got a gun, they usually got a gun."

The officers cite him for driving without properly updated registration stickers and tell the driver that any complaints he has about Lebert can be brought up in court if he wished to challenge the citation.

The Medford police chief suspended Lebert with pay after the driver posted the video online and it circulated on social media.

"I am troubled by what I have seen on the video," said Police Chief Leo Sacco. "I was upset to see one of my officers involved in this kind of activity."

Lebert said he had not seen the video and declined comment.