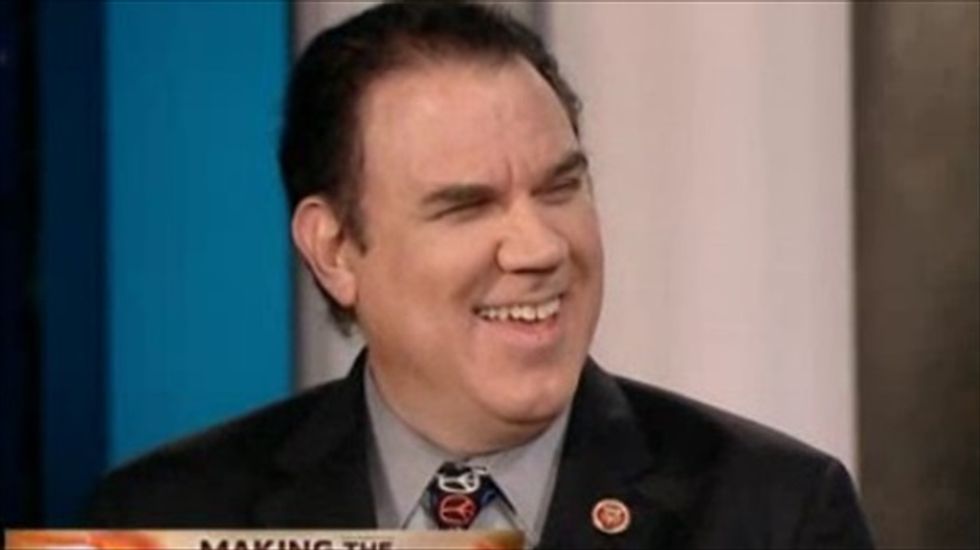 With Marco Rubio vacating his seat, the Florida representative is looking to turn the Sunshine State blue with his inflammatory quotables and plentiful coffers

Who is Alan Grayson? Alan Grayson is an outspokenly progressive Democratic member of the House of Representatives from Florida who is responsible for 90% of all scowly leftist congressional zingers posted in your Facebook feed now that Barney Frank has retired. He is running for the Florida Senate seat that Marco Rubio will vacate in 2016 because he really wants to become president .

Why on earth should I care? Because you all smugly mock Florida, then retire here anyway. (Try Arizona.) Also, Democrats are desperately trying retake the US senate in 2016, and Rubio just abandoned a Senate seat that the Republican party could have held for a generation.

Isn’t a Democrat already running for Senate in Florida? Weird how you knew that already, but yes! Patrick Murphy, who’s best known for defeating Commie Nazi hunter and Iraqi torturer Alan West, has already been endorsed by the Democratic Senatorial Campaign Committee and many Florida officials. But he’s also a former Republican who became a Democrat in 2012 and voted for the Keystone XL pipeline and to weaken Dodd-Frank financial reforms .

Isn’t a centrist Democrat better in a purple state like Florida? Florida Democratic officials think so. In 2010, their gubernatorial candidate was former bank executive Alex Sink, who ran as a centrist and used the word “liberal” the way vampires use suntan lotion. She lost. In 2014, she spent a ton of money to lose a special congressional election to newcomer David Jolly. Also the Democrats’ 2014 gubernatorial candidate was a former Republican who lost to Lord Voldemort . Running to the center can backfire when you don’t sound like an alternative .

So Grayson would be better? He’s a persuasive speaker, an effective congressman and endlessly quotable, but, for every “Republicans’ health care plan is ‘die quickly’” line, there’s him calling a lobbyist a “ whore ”. He called a newspaper editor a “shitting robot” for questioning why he had millions stored in offshore accounts . He has a personal fortune and can raise a ton from devoted fans nationwide, but those people don’t vote in Florida. He lost the 2010 election by 18% in part because of the Tea Party wave but also because Grayson was easy to lampoon to locals as “Alan Grayson, D-MSNBC” and was a really easy conservative fundraising target. Also his annulment was really quite gross .

What should I root for here? Grayson is a lot like Donald Trump in that he channels the id of his party’s wing and, to their utter terror, can flip off party leadership because he doesn’t need their money. But, like Trump, he has a tendency to get high on his own supply and say silly things. Grayson can win the race (Florida Democrats outnumber Republicans by almost 500,000 and turn out in presidential-year elections), but if nothing else maybe Florida Democratic officials will consider him scarier than Republicans and decide they should sound like progressives for once instead.