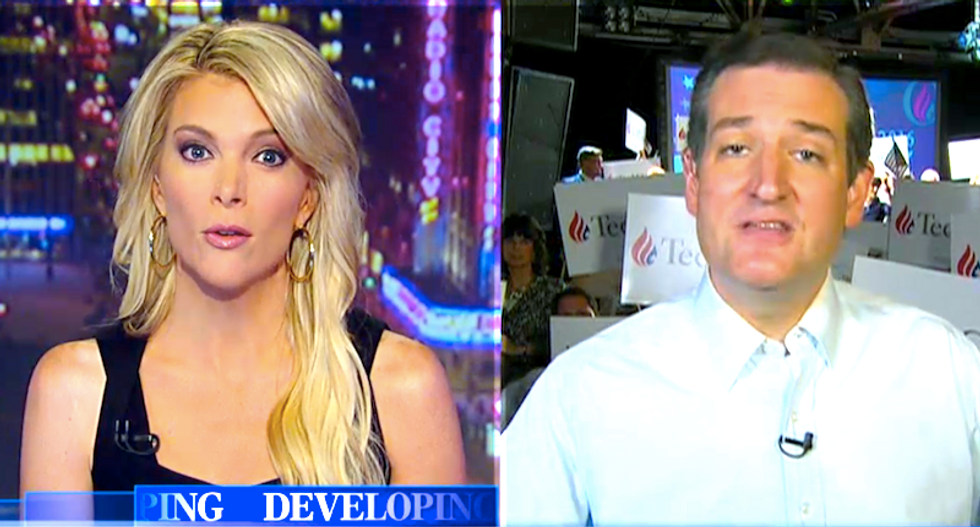 Megyn Kelly grilled Sen. Ted Cruz (R-TX) on his plan to rewrite the Constitution to remove U.S. Supreme Court justices who ruled in favor of Obamacare and marriage equality.

Cruz, a Republican presidential candidate, described the same-sex marriage ruling as “one of the darkest days in our nation’s history,” and he proposed a constitutional amendment that would require Supreme Court justices to face re-election every eight years.

Kelly said dismissively that the majority had “found a constitutional right” to marriage, but she confronted Cruz over his plan, reported Mediaite.

“Alexander Hamilton (wrote), ‘The complete independence of the courts is peculiarly essential in a limited constitution,’” Kelly reminded the strict constitutionalist senator. “Now you want to rewrite the constitution in response to a couple of decisions you don’t like?”

Cruz said last week’s decisions were simply “the latest in a long line and, sadly, were the nadir of the Supreme Court,” and he quoted talking points from Justice Antonin Scalia’s dissent in Obergefell v. Hodges to describe the decision as an “assault on our democracy.”

“It was five unelected lawyers setting themselves up’ – and these are Scalia’s words – ‘as the rulers of all 320 million Americans,’” Cruz said. “It was illegitimate, and it was wrong.”

Kelly assured the senator she understood his concerns, but she asked him to consider his plan’s unintended consequences.

“I get that, but in response to a decision that you feel was politically motivated by the justices who are in the majority, you want to make the court more political?” she said.

Cruz argued that the Constitution’s framers had intended to limit the court’s power through the threat of impeachment, but he said that hasn’t even been a “scarecrow” for justices for two centuries.

“Even 200 years ago, the Supreme Court wasn’t afraid of it,” he said, but he conceded that impeachment would be nearly impossible in today’s divided U.S. Senate.

“We can’t even muster 50 votes to defeat Loretta Lynch, the attorney general who tells us she’s not going to follow the law or the Constitution, (so) there’s no universe in which there are 67 votes to remove Anthony Kennedy from the Supreme Court,” Cruz said, revealing the target of his wrath.

Kelly reminded Cruz that American voters had twice elected President Barack Obama, so she wondered how the Tea Party senator could be sure he would like the results of his plan to put Supreme Court justices before voters.

“Let’s be clear,” Cruz said, momentarily losing his footing. “What I’m talking about are judicial retention elections, which means you could have the same appointment, the same senate confirmation, but every eight years the people would have an up-or-down vote with the option to remove a justice.”

“But what if the people bounced out Scalia and Alito and Thomas and we had a President Obama in the White House?” Kelly said.

Cruz said 20 states had required judges to face retention elections, and he said voters in those states had only “sparingly” replaced those jurists.

“But the alternative is, who in their right mind would design a system where every major public policy issue of the day is decided not by the people, not by the Constitution, not by the elected representatives, but by nine elite lawyers in Washington, D.C., as Justice Scalia observed in dissent?” Cruz said. “All nine of them – they either graduated from Harvard or Yale – eight or nine of them are from the east coast or the west coast.”

Kelly smirked and reminded Cruz that he, too, had graduated from Harvard Law School and jokingly called him a “smartypants.”

“Yes, I graduated from Harvard, as well,” Cruz admitted. “My dad refers to my time up there as missionary work. I think the problem was that I didn’t learn what they wanted me to learn there. I was a little too thick-headed to be indoctrinated when I was up there.”