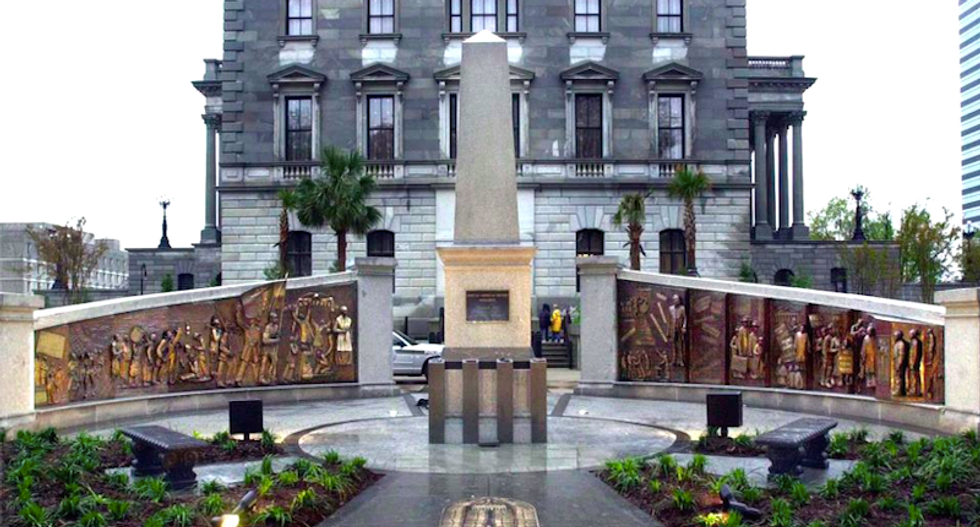 Nearly 40,000 people have signed onto a petition to remove the African-American Monument from the South Carolina statehouse grounds after a Confederate flag was taken down.

The flag was moved in 2000 from the statehouse dome to a Confederate Soldier's Monument nearby, and a monument to the state's black history was built the following year as part of the legislative agreement over the tribute to the Confederacy.

The petition's author, Keith Harmon, said the flag should not have been removed in response to the massacre of nine black churchgoers by a white supremacist who posed for photos with Confederate symbols.

"I think killing nine innocent people was completely and totally wrong, (but) it has nothing to do with the flag -- nothing at all," said Harmon, of Greenville.

Harmon said he had difficulty seeing the Confederate flag as a symbol of hate because his ancestors fought under it.

"My great, great, great grandfather and ancestors fought in this war for this state," Harmon said.

The petition complains that the Confederate flag was removed because it offended black people through its historic association with slavery and white supremacy, and laughably asserts that the African-American Monument, designed by sculptor Ed Dwight, provokes the same outrage for whites.

"The African American Monument depicts slave ships, mistreatment and words such as 'segregation' and 'Jim Crow,'" the petition states. "This being the case, it is undeniable that this monument can and does serve to invoke in the white community feelings of shame, humiliation and offense, serving as a constant reminder of the dark history of slavery."

The petition had gathered more than 39,300 signatures by Friday afternoon, with a goal set for 50,000 signatures asking for the state legislature to remove the monument.

Harmon said he hoped both monuments would remain on the statehouse grounds, but he said the African-American Monument should go if the Confederate flag came down -- as it did July 10.

South Carolina Petition Demonstrates What Happens When You Try to Compromise With the Left https://t.co/MsqYu2RiNi #ConfederateTakeDown
— Moonbattery (@Moonbattery) 1436806956.0

Just when the Department of Justice's (DOJ) investigation into former President Donald Trump's dealings with Russia and the 2016 election seemed to be over, two Democrats from the House of Representatives are now requesting the DOJ's independent inspector general to begin an investigation of the entire Russia inquiry.

Ted Lieu (D-California) and Dan Goldman (D-New York) have initiated the request, stating that new information they have learned from a New York Times article has detailed multiple possible ethic and legal violations, including abuse of power, prosecutorial misconduct and even possible financial crimes.