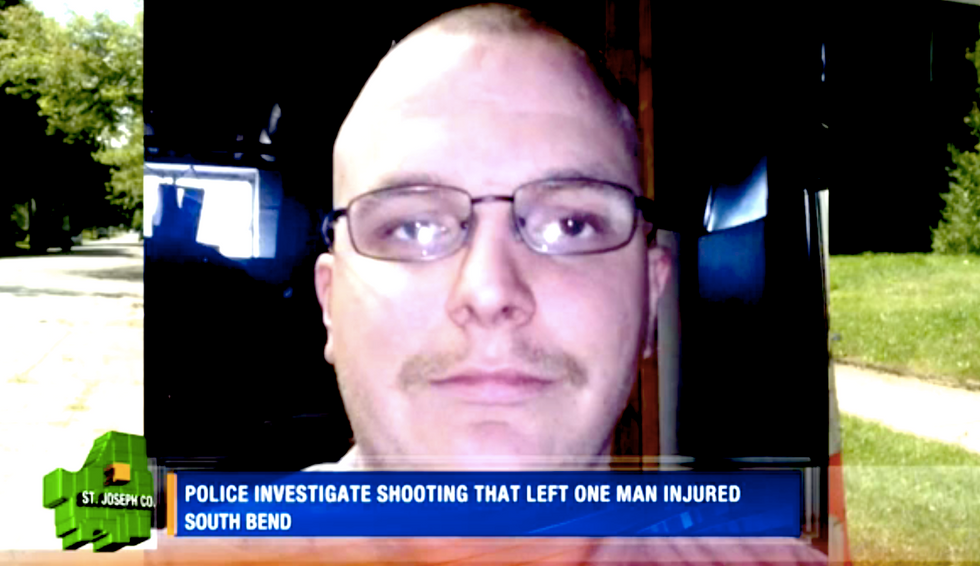 A South Bend, Indiana man who was shot while flying a "huge" Confederate Flag from his truck and driving through a black neighborhood last Thursday didn't mean to provoke a racial incident, insists his friend.

The woman who the 28-year-old man was on his way to visit told the South Bend Tribune that in spite of the flag and the fact that her friend apparently shouted racial epithets at a group of black residents, he has never to her knowledge been racist.

“I’ve never known him to use any racial slurs,” said Cally Baker on Saturday. “Unless someone (provoked) him, I can’t imagine him just blurting out the N-word.”

As for the flag, she said, “It is a Confederate flag, I can attest to that. But it has a military emblem on it...so it was something he was proud of more or less because of the military aspect of it.”

The Tribune declined to name the man, but WNDU said that his name is Richard Dillman, a native of Arkansas and a military veteran. He was on his way to meet Baker when he stopped at a convenience store in a majority-black neighborhood.

An altercation flared up that resulted in Dillman threatening a group of black men with a machete and shouting racial slurs at them, according to witnesses.

“He had absolutely no weapon on him but the machete, and it was in the back of the truck, so he had no way to get to it,” Baker explained.

However, one of the men in the dispute opened fire, striking the machete-wielding Dillman in the cheek and upper back.

According to the Tribune's Erin Blasko, "The man was later found one block east of the scene, at Fassnacht and Birdsell Street, conscious and standing but bleeding from his wounds."

“He came up to my door, and when he opened the door he said he got shot," Baker said, "and I saw the blood that was in his mouth.”

"Then I got scared," she said.

Dillman is currently recovering at home with a "puffed up" cheek and his arm in a sling.

Baker said she hopes the incident will not "become overblown" because of its racial overtones.

“The whole situation is kind of crazy,” she said. “I just (don’t) want it to become a huge racial thing.”

Captain Phil Trent of the South Bend Police Department told WNDU, "We want to talk to these individuals from the opposing side because we want to get the story and see aggravating and mitigating circumstances."

The shooter's identity and that of the other bystanders remains unknown. Police are still attempting to locate these individuals.