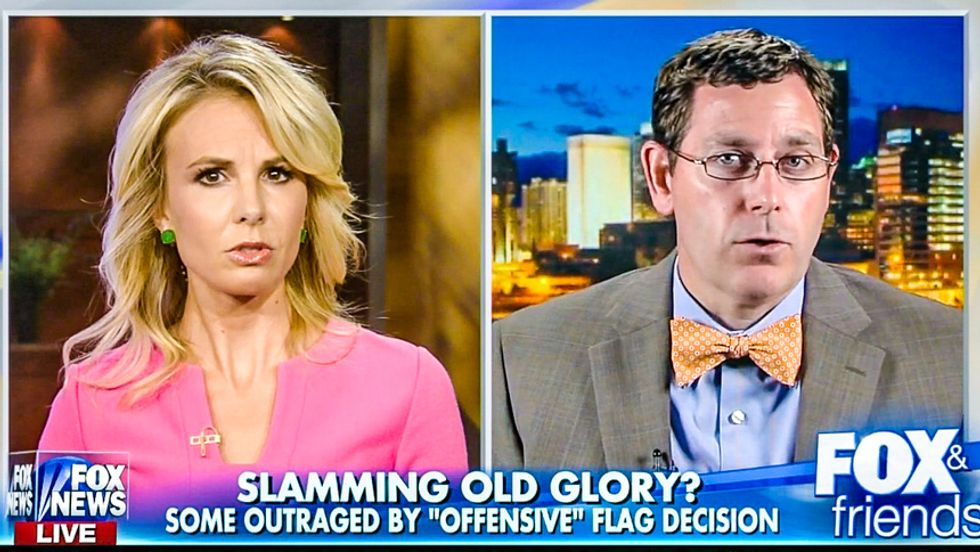 Fox News host Elisabeth Hasselbeck disagreed with a North Carolina pastor on Tuesday whose church was flying the Christian flag above the American flag.

Leading into an interview with Elizabeth Baptist Church Pastor Rit Varriale, Fox & Friends eschewed the Fight For Faith opening graphics the show normally uses to hype Christians who feel they have been persecuted and silenced by the government.

Instead, Hasselbeck announced that the Elizabeth Baptist Church was "sparking outrage" because it had recently begun flying the Christian flag over the American flag in response to the Supreme Court's ruling that legalized same-sex marriage.

"What is your message in flying the church flag above the American flag?" Hasselbeck squinted at Varriale.

"God is first," Varriale replied. "It you're a monotheist and you believe God is the highest authority then you have to stop when any human authority would try to get you to dishonor that commitment to God. And that's where we're at right now."

"And are you referring to the government here or the Supreme Court?" Hasselbeck wondered. "Who is disrespecting your religion right here that you believe you need to send this visible message to?"

Varriale said that there had been a "pushback on traditional Christian values in our culture" starting with prayer being banned from public schools.

"Pastor, some may agree with your message there but the method in which you're showing it is really piercing some," she insisted, noting that viewers had called Christian flag display an "insult to our country" and "unpatriotic."

"So, what do you say to people who feel as though you are actually disrespecting Old Glory in putting forth your message?" the Fox News host pressed.

Varriale said that, as a veteran, he loved his country, and the soldiers who died in battle gave him the freedom to fly the flag any way he wanted.

Later in the morning, Hasselbeck even disagreed with viewers who wrote in on Facebook that "God is above everything."

"You all are split on it," she said. "You know, as a Christian, I'm not sure anything should fly above the American flag. And I'm not sure God needs a flag."