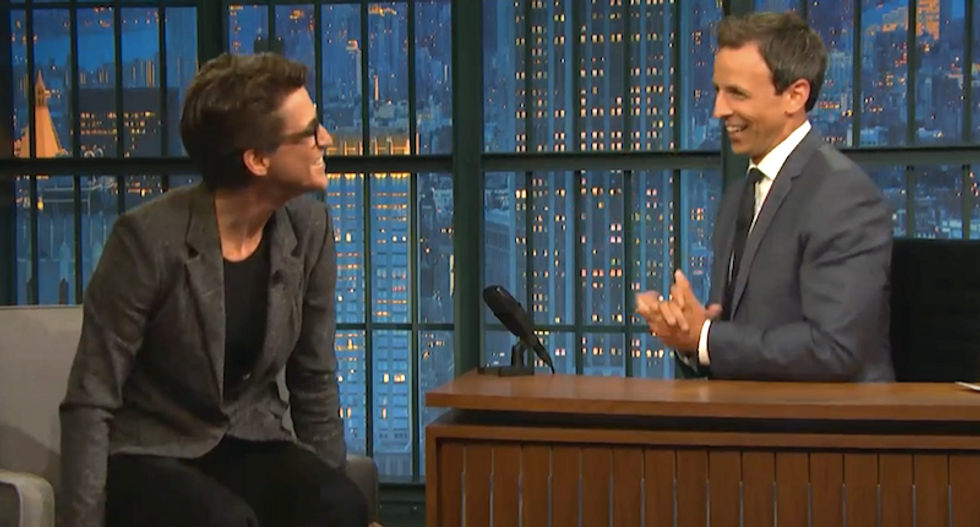 Donald Trump's improbable rise to the top of the Republican presidential polls will leave out more established candidates in next month's Fox News debate -- the first of the campaign season, Rachel Maddow said.

"I will say this, Trump's a very good communicator," Meyers said. "I always know exactly what he's thinking. I'm not like, I wish he hadn't used such big words -- like huge."

Maddow said she had been able to dismiss Trump's previous flirtations with running from office, but she said he was impossible to ignore in this campaign.

"He's really running, and Republicans really like him," she said. "I love the idea that this is a stunt and I love the idea that he's just a celebrity and this isn't actually a political campaign, but it turns out Republican voters want Donald Trump more than they want any of the other 40 people running. That is a gift from God, in terms of this being my job."

Maddow found it unbelievable that Ohio Gov. John Kasich, who announced his presidential campaign this week, would likely be left out of the Aug. 6 debate -- which will be held in the state where he's governor and televised by the cable network where he once worked.

"They're going to make him watch it from home, which happens to be the Governor's Mansion," she said.

Maddow said it was "bizarre" that the debate field was limited to just 10 -- which would exclude at least six of the major candidates.

"They've got to let them all debate, and hopefully -- if the Republican Party, like you know, ought to be a major political party -- then, in a real debate guys like Donald Trump would lose the debate and therefore lose support," she said.

Meyers said that, so far, support for Trump has only grown stronger with each of his outrageous insults -- and he compared the situation to Mitt Romney's infamous "47 percent" remark captured on video during a private event.

"That can't happen for Trump -- every thing that would be bad, he says at a podium with, like, 'Donald Trump' (written on it), and he makes sure the mic's on before he does it," Meyers said.

Maddow said she couldn't even imagine a Trump gaffe, and Meyers said other candidates are left to watch his support grow while behaving in a manner that would destroy their own campaigns.

"My prediction is he brings out a nicer, bigger podium," Meyers said.

Alvis Shrewsbury turned himself in to a Wyoming jail after being charged with second-degree DUI. Nineteen days later, he was dead, Insider reports.

Shrewsbury communicated with his family while he was in jail, but as the days went on, his appearance began to trouble them.