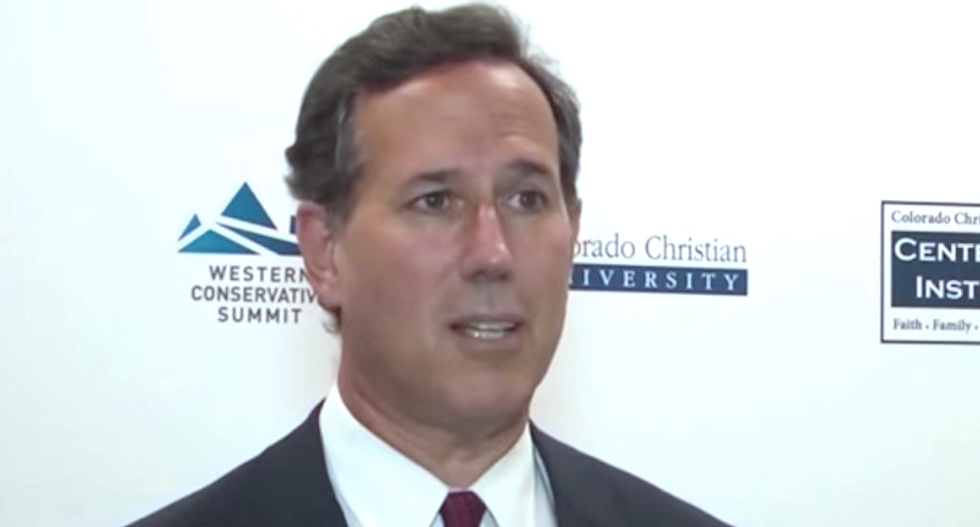 Santorum, who’s running again for the Republican presidential nomination, unsuccessfully lobbied Google to alter search results involving his name – but he thinks he was vindicated in his warning against bestiality, reported Right Wing Watch.

He first made the comparison in 2003, shortly before the U.S. Supreme Court struck down state bans on sodomy, saying such laws against consensual sex were necessary to prevent non-consensual sex.

“In every society, the definition of marriage has not ever to my knowledge included homosexuality,” Santorum said at the time. “That's not to pick on homosexuality. It's not, you know, man on child, man on dog, or whatever the case may be.”

He has defended his remarks over the years, and now he says he was right along.

Santorum was asked about his long-ago warning about “man on dog” sex at a Colorado conservative gathering the same day the Supreme Court legalized same-sex marriage.

"What I say is if you have the right to consensual sexual activity, then it opens the door to a variety of different things -- and this ruling did it,” Santorum said.

“This ruling followed up with what I said would happen if the Supreme Court ruled the way it did, and the Supreme Court has followed their line of reasoning that I identified very early on that if consensual sexual activity is a constitutional right, then we have to – it leads logically, as you saw in the court's opinion, that all things, that all the rights come with that," he added.

He was asked whether the Obergefell v. Hodges decision would open the door to polygamy, and Santorum said he didn’t see why not.

“(The ruling) has certainly opened the door for a variety of other things that are going to happen,” Santorum said.