WATCH: Chicago woman shouts N-word at black mom -- then lectures her about the Constitution 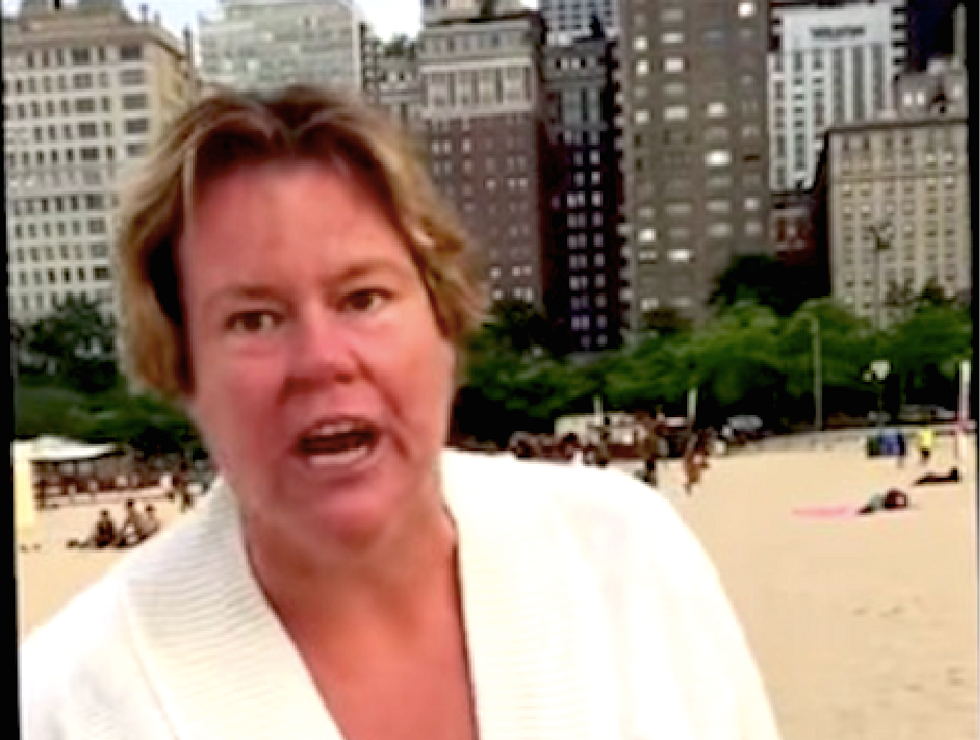 A black woman relaxing at Oak Street Beach in Chicago and minding a group of children filmed a white beachgoer's racist rant when the other woman became irate because the children had "splashed" her.

Raquel Bolton posted video of the encounter to her Facebook page, writing, "Wow the hate is real!"

"I'm going to repost the video please share," Bolton wrote. "Race has nothing to with ignorance . While at the beach ‪#‎oakstreetbeach‬ this lady called us the N Word three times in front of my children all because they splashed water on her."

"N****r!" Massion spits at the camera as the video begins.

"Oh, of course you haven’t graduated and you don’t know the Constitution of the United States and what it says," said Massion. "It’s called free speech in America. Right to free speech! Look it up!”

Bolton also posted a photo of where Massion was sitting when she was purportedly splashed by the children.

"She is literally sitting at the edge of the water where a bunch of children are playing," wrote Robyn Pennacchia at the Frisky.

"I’m gonna say, sitting where she was sitting, the odds of her not getting wet were slim to none," Pannacchia said. "If you don’t want to get splashed, if that is the kind of thing that is going to upset you so deeply that you would actually just launch into a racist tirade, then you should probably move up the beach."

In 2006, Massion was apparently the center of another racially charged incident in which she attacked police officers and hurled racial epithets at them.

According to the Northwestern University newspaper, police were called to one of the university's student lounge areas because then-34-year-old Massion was harassing students.

Massion was not authorized to be on the campus and when officers told her she was trespassing, she reportedly shouted racial epithets at them and refused to show any identification.

The Daily Northwestern said, "She continued to yell and curse at the officers. He said officers tried to calm Massion down, but she spit at them.

When the highly agitated Massion attempted to grab an officer by his shirt, she was arrested and handcuffed.

On the way to the police vehicle, Massion managed to strike one officer in the head, knocking off his glasses. She then began to thrash and kick as police attempted to load her into the back seat of the squad car.

A police source said that Massion "refused to have her picture taken, make any phone calls or cooperate in any way with the police officers."