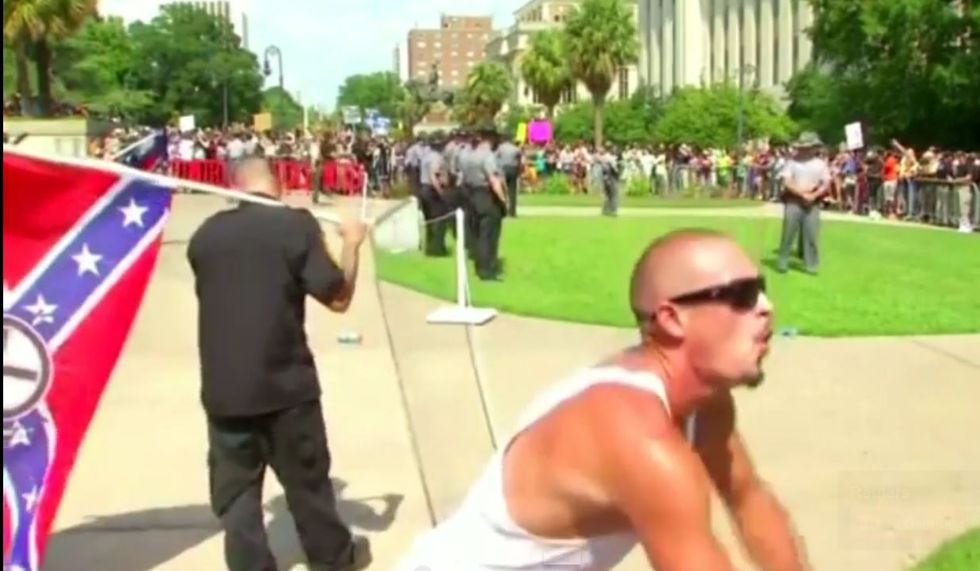 After proclaiming that the Confederate flag isn't a symbol of hate and vowing a peaceful protest against its removal, members of the Ku Klux Klan required a police escort to leave a rally in front of the South Carolina statehouse on Saturday.

The Klan rally was scheduled from 3 p.m. to 5 p.m. on the south side of the statehouse grounds, while on the north side, the Black Educators For Justice were scheduled from 12 p.m. to 4 p.m., Greenville Online reports. Governor Nikki Haley had asked people to stay home instead.

"Our family hopes the people of South Carolina will join us in staying away from the disruptive, hateful spectacle members of the Ku Klux Klan hope to create over the weekend and instead focus on what brings us together," she said in a statement. "We want to make the Statehouse a lonely place for them. In doing so, we'll honor those we have lost and continue to make our state stronger."

Instead, the event turned raucous.

Despite numerous claims by the KKK that their event would be peaceful, videos of Klan members carrying confederate flags and taunting black protesters with ugly racist speech quickly emerged.

In one video, a white man with a shaved head can be seen making ape noises, another threatening to "hang your black *ss." In another video, another Confederate flag-holding white man tells a person that they are the color of excrement.

According to Sam Tyson, who works digital media for ABC News, about 40-50 Klan members showed up. Members of the Black Panthers and other groups also came to counter them, in the "Countering the Attack on Black Unity" rally, according to local WISTV.

In video from the rally, a heavy police presence can be seen, and Confederate flag-holding protesters are yelling disturbing, racist comments at members of the opposing protest.

Both sides yelling. Barricades and police are keeping both from the other. Background: they're trying to burn flag http://t.co/tE66R1kLzT
— Sam Tyson (@Sam Tyson) 1437248110.0

Protesters have just ripped up a confederate flag after taking it from a KKK protester #ColumbiaSC http://t.co/lnrQ73O9f8
— Bart Boatwright (@Bart Boatwright) 1437249337.0

A photo posted to Twitter shows a black police officer helping a protester from the Klan side out of the heat to shade and water.

According to KRMG-TV, Klan leaders promised that the rally would be peaceful.

Watch video of the protest here: