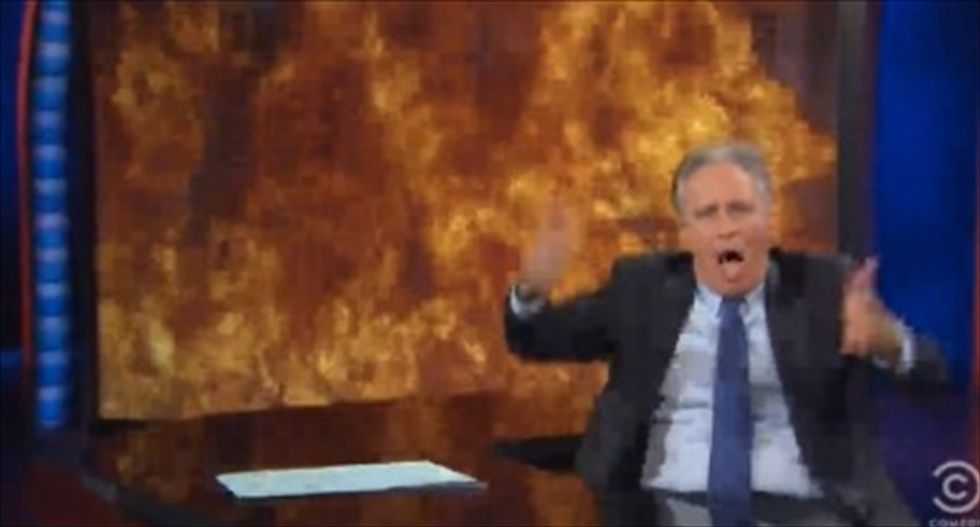 Jon Stewart started his last week hosting the Daily Show by dissecting how badly Fox News analyst Howard Kurtz misfired in trying to paint him as an apologist for President Barack Obama.

"I'm just playing around with you guys," Stewart said over shots of various Fox hosts. "Your hypocrisy isn't a bug in the Fox model; it's the feature. Your job is to discredit any source of criticism that might hurt the conservative brand by angrily holding them to standards you yourselves jettison in your news network's mission statement."

On Sunday, Kurtz and Baltimore Sun media critic David Zurawik accused Stewart of being "a tool" of the Obama administration, following Politico's report on the host's "secret" meetings with the president.

Stewart shot down Kurtz's segment with a barrage of Fox clips showing their hosts criticizing Obama by pointing out that "even" Stewart himself was knocking him on various policy decisions. It was also Kurtz, Stewart noted, who reported on Fox officials instructing the news department to call the Affordable Care Act -- a.k.a. Obamacare -- "government-run healthcare" at every opportunity.

"My hunch is, this show's been harder on the Obama administration and this president per capita than you ever were in your eight years of [George W.] Bush fingerb*nging," Stewart said.

However, he added, Fox will not "get around" to verifying that statistic, since the conservative network never responded to his compilation of 50 Fox lies in six seconds that aired this past February.

Stewart then asked Fox, "How does that motherf*cking taste?" before lighting an imaginary match and yelling, "Adios motherf*ckers!" ... only to be reminded that he still has three shows left, including a nearly-hourlong finale on Thursday.