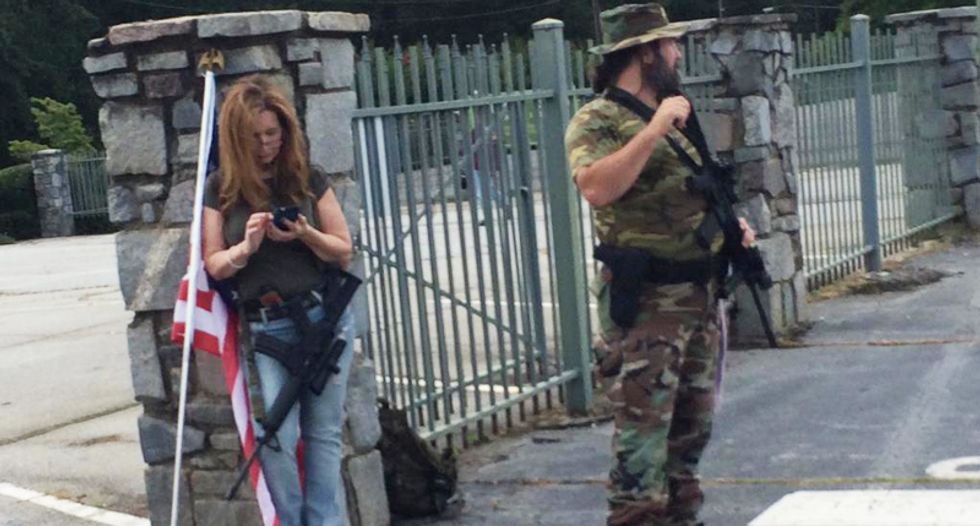 Police at Stone Mountain Park in Georgia greeted hundreds of Confederate flag supporters -- as well as armed militia members -- at the popular park on Saturday, with the Atlanta Journal-Constitution reporting that traffic was backed up for miles this morning.

According to WXIA, fans of the flag representing secession from the United States contacted park authorities about rally before the latest flap in Atlanta where police say two white men placed several of the Confederate flags on the grounds of Martin Luther King's home church.

Organizers of Saturday's rally set up a Facebook page listing various locations where fans of the divisive flag could meet up early his morning, saying 40 counties were participating before adding, "Amazing y'all! God is good ain't he?!"

Attendees were cautioned to follow some "simple and logical" rules, including, "NO racial slurs or offensive remarks," no alcohol,  and "NO taunting other vehicles, flipping other people off during the ride."

No mention was made of weapons in the open carry state and AJC reporter Chris Joyner tweeted a photo (see below) of militia members standing guard nearby the rally as protesters held up signs accusing the flag supporters of racism.

Park police were expected to increase security while stating that are not officially sanctioning the rally.

"This rally is not sanction by, supported by, endorsed by anyone with the park," said John Bankhead of the Stone Mountain Park Police Department, adding, "They're bringing in everybody who works full time or part time to ensure the safety of the park and to make sure these people are safe in the exercise of their First Amendment rights."

Organizers cautioned attendees to be on their best behavior, saying "Remember there will be people everywhere! Possibly media and cameras, ONE piece of negativity and that will be what goes Viral and that is what we will be remembered for," adding: "If you think you can't handle it don't come."