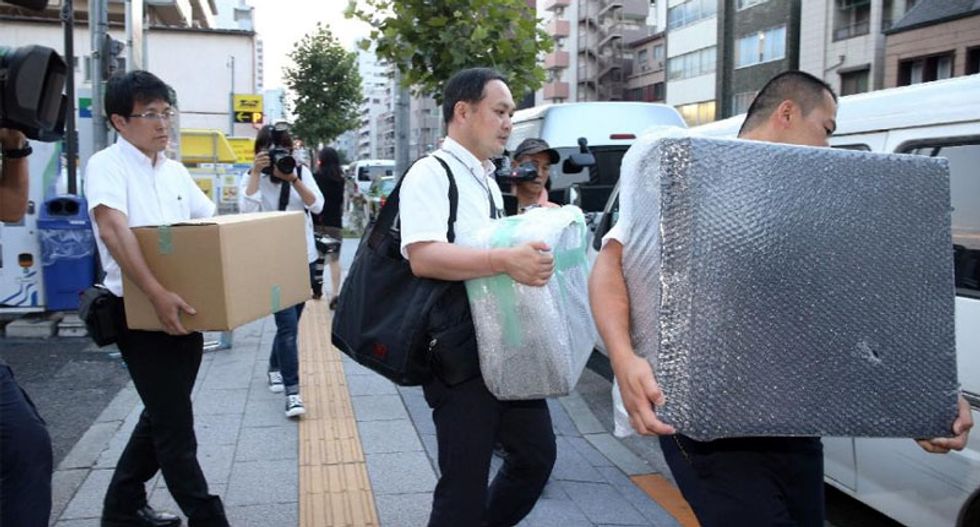 Police remove evidence from the house of Mark Karpeles, the head of defunct Bitcoin exchange MtGox, in Tokyo on August 3, 2015 (AFP Photo/Jiji Press)

The arrest of MtGox boss Mark Karpeles has begun to shed light on the defunct Bitcoin exchange after hundreds of millions of dollars in virtual currency vanished from its digital vaults last year.

But as details of a lengthy investigation by Japanese police trickle out, at least one crucial question remains unanswered: where is the money?

On Friday authorities issued a fresh arrest warrant for Frenchman Karpeles over claims he stole several million dollars from clients, including about $48,000 allegedly spent on a luxury canopy bed.

Karpeles, 30, who has reportedly denied the allegations, was initially taken into custody earlier this month and has been held without formal charges for three weeks, as allowed under Japanese law.

A fresh warrant resets the clock on how long police can hold him and grill the self-described computer geek over Tokyo-based MtGox's missing Bitcoins.

So far, police have accused Karpeles of manipulating data and stealing sums that amount to just a fraction of the 850,000 coins -- worth around $480 million at the time, or $387 million at current exchange rates -- that disappeared last year.

MtGox, which once said it handled around 80 percent of global Bitcoin transactions, filed for bankruptcy protection soon after the cyber-money went missing, leaving a trail of angry investors calling for answers.

The company initially said there was a bug in the software underpinning Bitcoins that allowed hackers to pilfer them.

Karpeles later claimed he had found some 200,000 of the lost coins in a "cold wallet" -- a storage device, such as a memory stick, that is not connected to other computers.

But the whereabouts of the money and Karpeles' involvement appear far from solved.

"If there were instances of mismanagement or fraud like this carried out by Mark Karpeles, then he should be held accountable," Bitcoin investor Kim Nilsson told AFP.

"(But) if these charges against (him) don't adequately explain where all the Bitcoin ... money went, then there are still unresolved questions, quite possibly additional crimes and criminals, that must be investigated further."

Nilsson also questioned whether MtGox's Bitcoin deposits were even real in the first place.

"Did MtGox at any point actually hold the coins in question, or have there been faked deposit entries merely making it look that way?" he asked

MtGox reportedly kept its own funds and clients' money in the same bank account.

Back in 2006, Karpeles -- who reportedly lived in an $11,000-a-month penthouse Tokyo apartment -- wrote on his blog that computer crime was "totally contrary to my ethical principles".

But four years later, a Paris court sentenced him in absentia to a year in prison for hacking. He had come to Japan to work for a web development company in 2009 and later got involved with the Bitcoin exchange.

Investors have called on the firm's court-appointed administrators to publicise its data so that experts around the world can help analyse what happened at MtGox.

But the case presented a complex challenge to Japanese police, as financial watchdogs around the world struggle to work out how to regulate digital money.

Unlike traditional currencies backed by a government or central bank, Bitcoins are generated by complex chains of interactions among a huge network of computers around the planet.

"The Bitcoin case is really an embezzlement case, but embezzlement has to involve a 'tangible object,'" said Hisashi Sonoda, a criminal law professor at Japan's Konan University.

"Japanese criminal law treats digital currency as 'data,' not what we call 'tangible object' in a legal sense."

Backers say virtual currencies, which started to appear around 2009, allow for an efficient and anonymous way to store and transfer funds online.

But critics argue the lack of legal framework governing the currency, the opaque way it is traded and its volatility make it dangerous.

"If there was a clause or a fresh law targeting digital currency, that would have been helpful for investigators."