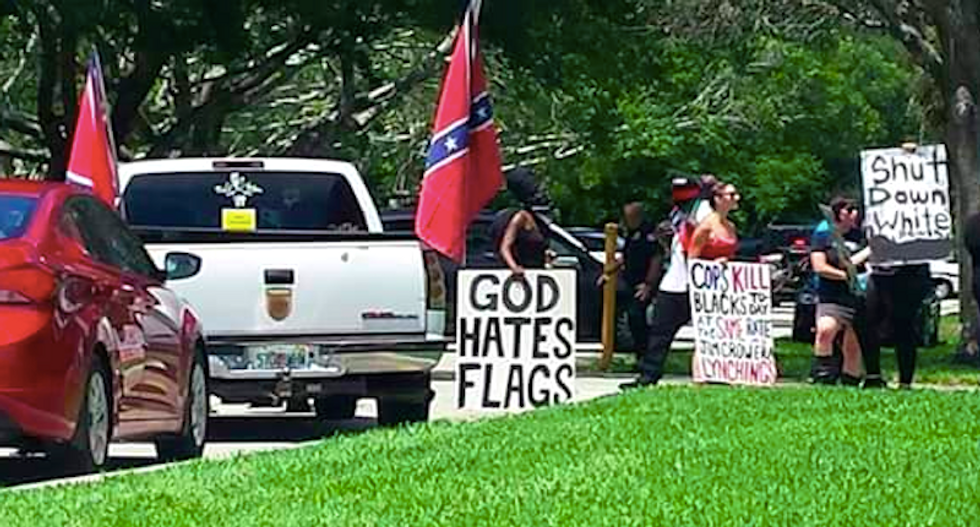 Confederate flag supporters are accused of displaying weapons Sunday afternoon against protesters of their 15-mile road rally in Florida.

Police prevented about 40 protesters from blocking an exit to start the rally, allowing several hundred demonstrators to drive their flag-festooned pickups and motorcycles from Pembroke Pines to Sunrise, reported the Sun-Sentinel.

About 100 more protesters awaited at the convoy's destination at a park for a barbecue, where nearly two dozen Sunrise police officers and Broward County sheriff's deputies kept the two groups apart.

Police said they had not heard any reports of weapons at the event, which they described as peaceful.

"I understand that the flag may be seen as a symbol of oppression, but this is not about hatred," said event organizer Chris Nicolaus, who promoted the rally on the South Florida Rednecks Facebook page. "We are not the KKK -- this is about southern heritage."

There have been nearly 200 rallies to support the flag since a white supremacist gunman with Confederate sympathies massacred nine black churchgoers in South Carolina, prompting the banner's removal from government buildings and store shelves.

"We do not condone racism or hate groups," said Brian K. Turner, of the Sons of Confederate Veterans. "We believe there is no correlation between the massacre in South Carolina and symbolism. What needs to be discussed is mental illness [of the accused shooter]."

Flag supporters accused their opponents of ignoring the history of the Confederacy, whose founding documents explicitly state a white supremacist intention to preserve the institution of slavery.

"I can understand why someone may be offended, but you have to understand history and not be," said Greg Grant, who sold Confederate flags at the start of the rally.

But protesters, some of whom removed flags from passing vehicles, condemned the "parade (of) their symbols of hate."

"They don't realize this is a rebellious flag," said a protester who identified himself as St. James. "The reason all those states seceded was to keep slavery, and the more they hold up these flags, the more they're showing that's what they want: They want slavery, they want racism to be in his town."