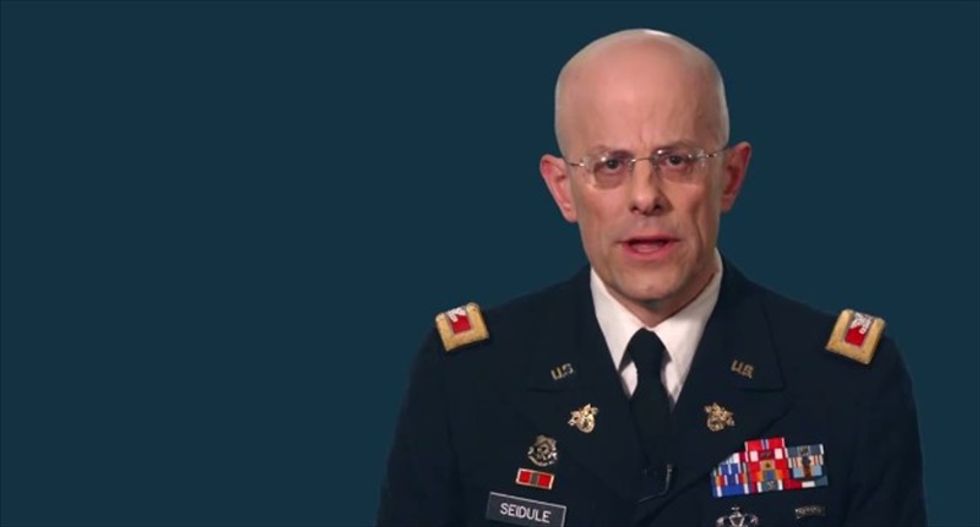 US Army Col. Ty Seidule discusses the reasons behind the Civil War in a video released by Prager University on Aug. 10, 2015. [YouTube]

An "online resource promoting knowledge and clarity" founded by conservative commentator Dennis Prager released a video on Monday that shuts down the conservative argument that the Civil War was about "state's rights" and not the South wanting to preserve its "peculiar institution" of slavery.

"Slavery is the great shame of America's history," US Army Col. Ty Seidule says in the video. "No one denies that. But it's to America's everlasting credit that it fought the most devastating war in its history in order to abolish slavery. As a soldier, I am proud that the United States Army -- my army -- defeated the Confederates."

Seidule, who teaches and heads up the history department at West Point Military Academy, noted that about 200,000 members of the Army at the time were former slaves and were part of the effort that ultimately freed 4 million slaves. He also argued that slavery was, "by a wide margin," the South's primary motivation for entering the conflict.

He also pointed out that the Confederacy's vice-president, Alexander Stephens, defended the practice of slavery in his "Cornerstone Speech" of 1861, in which Stephens argued that it is a "great truth that the Negro is not equal to the white man."

Seidule's remarks also runs counter to the new history curriculum approved for Texas public schools, which do not require students to read Stephens' speech, but will list "sectionalism" and "states' rights" as the driving reasons behind the war.

"This raises an obvious question: the states' rights to what?" Seidule asks in the video. "Wasn't it to maintain and spread slavery?"

He then points out that "states rights" were not a concern exclusive to the South; Mississippi residents complained that the concept was "too strong" in New York, where they were barred by state law from bringing their slaves into Manhattan.

The video was released online by Prager University, which says on its website that it specializes in releasing five-minute "courses" from a variety of speakers. Seidule is listed as a member of its "teaching faculty," alongside podcaster Adam Corolla and attorney Alan Dershowitz, among others.

"We are not an accredited academic institution. And we don't want to be," the website states.

Republican officials in Sarasota, Florida distanced themselves from Prager last October when he described the conservative "war on women" as "a gargantuan lie to get votes" during a rally. He also called a 2007 study by the Justice Department concerning sexual assault on college campuses "nonsense."

"Did you ever look at what counts? An unwanted kiss is considered sexual assault," Prager said at the time. "I'm stunned it's only 1 in 5. Four out of five women have not gotten an unwanted kiss? My wife gets unwanted kisses every so often."