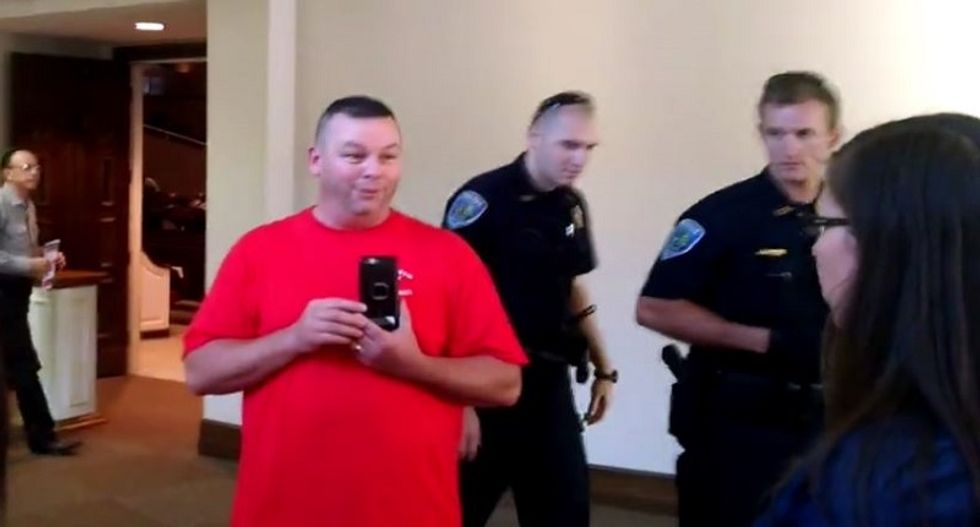 A group working to block a municipal civil rights ordinance that would protect LGBT people from discrimination had ordinance supporters escorted out of a Tuesday rally by police.

Protect Fayetteville's anti-ordinance rally featured Oregon bakers, Aaron and Melissa Klein, who made national news after refusing to make a wedding cake for a lesbian couple, as guest speakers.

According to 5NewsOnline, the event was held at the University Baptist Church in Fayetteville.

The bakery, Sweet Cakes by Melissa, went out of business after the Kleins were forced to pay $135,000 in damages for causing the couple emotional distress. The Kleins had shared the couple's address with the public and went on a media campaign deriding them.

Like the bakery, the ordinance has become a focal point in the battle over LGBT rights. Reality star Michelle Duggar last year made robocalls opposing the ordinance.

The ordinance was approved by local leaders, then shot down by voters in a close-call election. Voters will again decide on the ordinance next month, 5News reports.

A video posted to Facebook shows ordinance opponent Michael Collins interrupt a reporter's interview with ordinance supporters in what appears to be the foyer of the church where the rally was held, making condescending comments.

"I will tell you this, the idea of having a 3-year-old choose their gender is abominable," Collins says, smirking.

He says "gender identification" is synonymous with child abuse and that children will outgrow "gender confusion issues." He then goes into a strange tirade about hormones and razor blades and cutting genitals off.

After a female member of the opposing group invites him to sit down and have a productive conversation, Collins says, "yeah maybe where you're invited." He says they are trespassing.

At the end of the video, two police officers walk over and apparently tell the ordinance supporters to leave. The group claims all members of the public were invited to the event at a government meeting.

Last year, Michelle Duggar's recorded voice delivered messages in a fear-mongering Fayetteville robocall, warning that if the measure passed, it would allow "child predator convictions that claim they are female to have a legal right to enter private areas that are reserved for women and girls."

The Duggars' show, 19 Kids and Counting, was cancelled earlier this year when it was revealed that their own son, Josh, had molested underage girls and the Duggars had covered it up.

Watch the video, posted to the pro-ordinance group For Fayetteville's Facebook page, here:

Last night, August 11th, For Fayetteville supporters were escorted by the police out of the Protect Fayetteville rally. Alderman John LaTour made a public invitation to the rally at the last City Council meeting. This was NOT a protest. They were NOT disruptive. They wanted to listen to the Kleins speak. They were treated with aggression and disrespect. Please stand For Fayetteville. We need your help knocking doors and calling voters. Get out the Vote Sept. 8th! We can't afford to lose again. Sign up here: http://forfayetteville.com/coming-soon/signup/WARNING: this video contains language that may be upsetting.

Posted by For Fayetteville on Wednesday, August 12, 2015

The Buffalo mass shooting in which Black people specifically were targeted is just the latest example of racist-inspired hate crimes that plague the United States.

As reported by CNN on Monday, a study from the Anti-Defamation League revealed that white supremacists were responsible for more murders than any other political extremists last year, and they account for 55 percent of extremist murders in the past 10 years.

A new statue of Britain's late former prime minister Margaret Thatcher was fenced off on Monday following an egg-throwing protest shortly after it was installed in her hometown.

The Conservative prime minister known as the Iron Lady led the country from 1979 to 1990 and was the first British female premier.