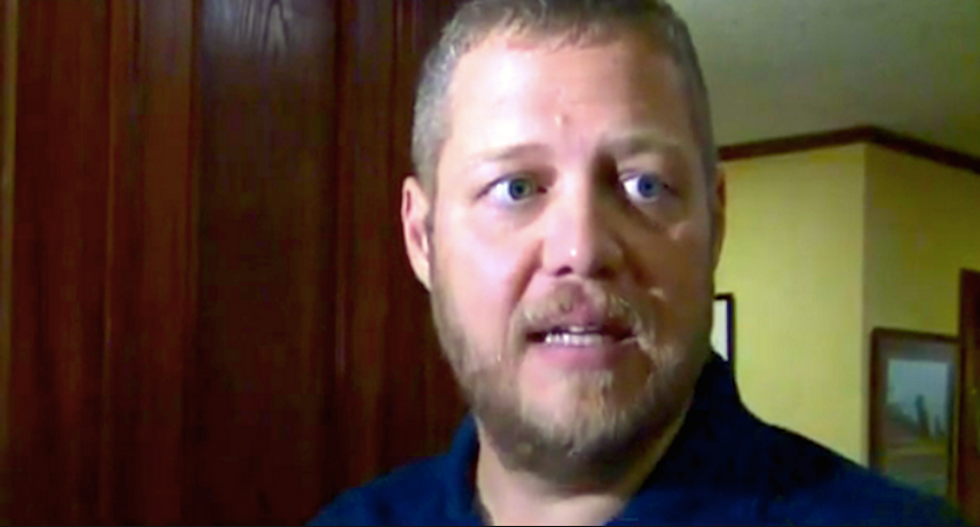 One of the Kentucky county clerks who is defying court orders to issue marriage licenses to same-sex couples said his religious faith requires him to notify LGBT people that they're going to Hell.

The 6th Circuit Court of Appeals on Wednesday slapped down the latest challenge filed by the Rowan county clerk, with help and encouragement from the conservative Liberty Counsel, ruling that county clerks are obligated to follow the law and not their personal beliefs.

“When you stand for what’s right and when you tell someone of the danger that they are in, and I think that when a person lives a lifestyle of sin whether it's homosexuality or drunkenness or drug addiction or adultery or thievery or any kind of sin that you continue in or live in, you are endangering yourself of spending eternity in Hell,” Davis said. “So in my view of what the Bible says, when you’re truly loving someone, you stand and you lovingly tell them, ‘This is not the way to Heaven, this is not the way of right.’”

He argued that the U.S. Supreme Court lacked the authority to overturn Kentucky laws that were approved by a majority of voters -- and he said he was willing to become a martyr over this "travesty."

“Our law says ‘one man and one woman’ and that is what I held my hand up and took an oath to and that is what I expected," Davis said. "If it takes it, I will go to jail over — if it takes my life, I will die for because I believe I owe that to the people that fought so I can have the freedom that I have. I owe that to them today, and you do, we all do. They fought and died so we could have this freedom and I’m going to fight and die for my kids and your kids can keep it.”

He said Kentucky Gov. Steve Beshear should meet with the families of slain service members and then call a special session of the State Legislature to vote on whether he should be obligated to follow court orders.

“Sit down with a man and a woman who sent their child off to war alive, hugged their neck, told them they loved them and brought them back in a pine box and get them to tell me what the price of freedom is," Davis said.

Davis said the Bible was the ultimate authority on all matters, and he said the Book of Genesis defines marriage from the beginning -- apparently opening the question of whether county clerks are biblically permitted.

“Where is Adam and Eve’s marriage license recorded at and who did they go get them issued by? I’ll tell you, God issued them, God ordained it," Davis said. "Whether you believe in God or not, the Bible is where marriage came from, and it is where it will continue to come from regardless of what man says that it is. It will never be anything but between one man and one woman in the eyes of God, that’s what marriage is and someone else may label it as something else but it can never be anything except between one man and one woman.”

The county clerk said the court ruling that essentially legalized same-sex marriage in all 50 states had made him and other Christians victims of religious persecution.

He told the radio host that he should be allowed to defy the law because God's laws "supersede" U.S. laws.

“God’s placed me here so that I can tell people, ‘Hey there is a higher power that we need to answer to, and it’s not people who wear black robes, it’s the one that wears the white robe,’” Davis said.