Erick Erickson: The difference between my sexist remarks and Trump's is I'm not running for president 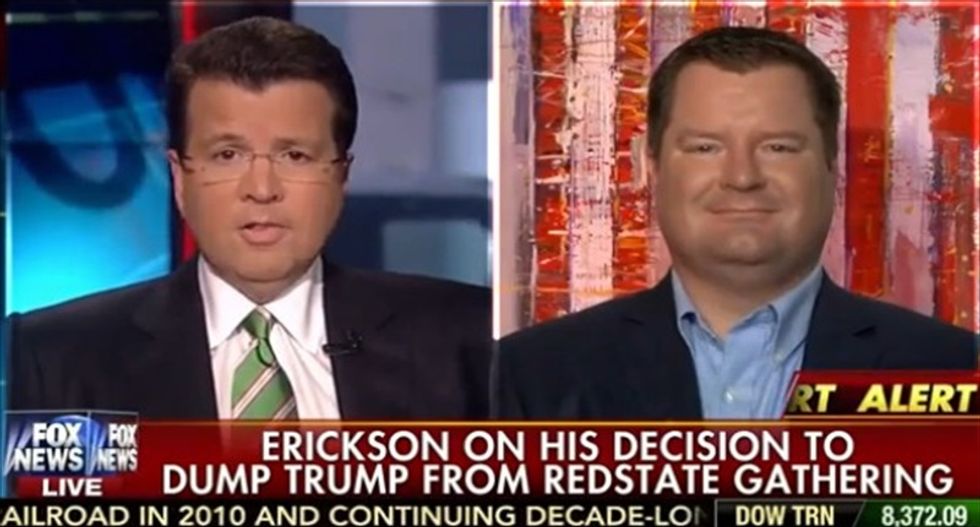 Fox News host Neil Cavuto pressed conservative blogger Erick Erickson on Monday after Erickson described his various disparaging remarks toward women as "needling people on the other side" and said he should not be held to the same standard as Donald Trump.

Erickson and Trump clashed over the weekend after the RedState.com head disinvited Trump from an Atlanta event hosted by his site.

Erickson argued on Friday night that Trump went too far when he said Megyn Kelly had "blood coming out of her wherever" when she pressed him regarding sexist comments during Thursday night's Republican presidential candidate debate.

Trump later called Erickson "a loser" and said he didn't want to appear at the event anyway.

On Monday, Erickson insisted that he revoked his invitation to Trump after the real estate mogul's campaign refused to give him a straight answer on what he meant by his remarks regarding Kelly.

"You can't disassociate yourself," Cavuto said. "You're very influential in this process. You are the one who disinvited Donald Trump. Donald Trump didn't disinvite himself."

"Exactly. I wouldn't have disinvited Donald Trump had I gotten clarification from his campaign on what he was saying," Erickson responded. "But the story changed several times and then the next morning they said he actually did say 'wherever,' but he meant nose."

However, Cavuto pointed out that critics have seized on Erickson's own history of sexist remarks, including references to "angry dateless feminists" and "feminazis."

"I think a lot of feminist groups tend to prove that they're humorless," Erickson replied. "And I don't regret some of the things that Donald Trump has pulled up. But I have said a lot of dumb things in my life that I've apologized for. There's a number of them I've apologized for. But I think the difference between Donald Trump is I'm not running for president and I did apologize, not just change my story."