Ex-Neo Nazi: Right-wing extremists 'on the verge of doing something horrible' over same-sex marriage 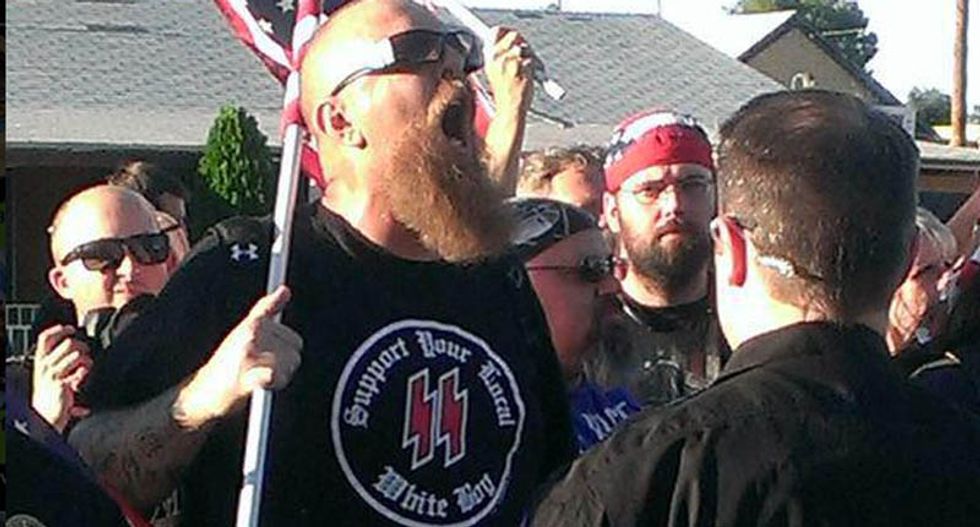 A former neo-Nazi and white supremacist warned website The Trace that he foresees extreme acts of violence in the nation's future over the Supreme Court ruling legalizing same-sex marriage in all fifty states.

In a candid interview, ex-skinhead Arno Michaelis told The Trace about how he joined the White Power movement at the age of 16 when he joined a Milwaukee gang and became the lead singer of a punk/metal band called Centurion. He and his friends set about arming themselves when they moved their headquarters into a largely Latino area.

"Guns are a staple, a central element" of white supremacist culture, Michaelis said.

"There’s this idea that there’s a huge noble cause you have to fight for, and if you don’t win, all is lost," he said. "For white supremacists, it’s genocide against white people. If you’re targeted in genocide, you better arm yourself and form some kind of resistance."

"The idea is to start a race war. The thinking is: The world is so messed up, there’s no fixing it. The only thing you can do is tear it down. And people are just itching for this to happen. You can see it on white supremacy sites," explained Michaelis.

Dylann Roof, who killed nine black worshippers at a historically African-American church in Charleston, South Carolina, said Michaelis, is just one of many disaffected whites who believe that their only recourse against a rapidly collapsing and dying society is violence.

"In the case of white supremacy, the basic idea of [minorities] having the same rights you have is seen as persecution. That was probably Roof’s take on it: This idea that our country is being taken from us. The way that translates to kids like Dylann Roof is, basically, they need to go out and do something about it," Michaelis said.

"Historically, any time civil rights are advanced, there’s pushback," he went on. "I think there are a lot of people on the verge of doing something horrible because of same-sex marriage, for instance. They see that as the death knell of our civil nation, and the only solution, for them, is to respond violently."

The Southern Poverty Law Center (SPLC) and other organizations that track and monitor hate groups and right-wing extremists have been beating a steady drumbeat of warning about the rise in hate group activity in the U.S. over the last 15 years.

In 2009, the Department of Homeland Security issued a report on terrorism "chatter" in the U.S. and the increasing threat posed by right-wing extremists and so-called "lone wolf" terrorists like Roof who act on their own and are therefore harder to track and monitor.

Conservatives like radio hosts Rush Limbaugh and Laura Ingraham and Fox News personality Michelle Malkin erupted in outrage, accusing the Obama administration of publishing the report as a targeted smear against U.S. conservatives.

In fact, the report was commissioned by the administration of George W. Bush during his last year in office.

Security officials said in the wake of gunman Jared Loughner's attack on a Democratic rally in Tuscon, Arizona in 2011 -- in which six people died and 11 were wounded, including U.S. Rep. Gabby Giffords (D-AZ) -- that the full court press conservatives executed against the report and its findings led to funding cuts for multiple agencies tasked with monitoring violent extremists.

As a result, the country has become less safe and less able to sniff out and stop potential attacks. A DHS intelligence report from February of this year warned that far-right extremists like white supremacists and the sovereign citizen movement pose a much greater threat to average Americans than ISIS or other Middle Eastern terror groups.