Florida pastor: The national debt will end 'immediately' when Planned Parenthood is defunded 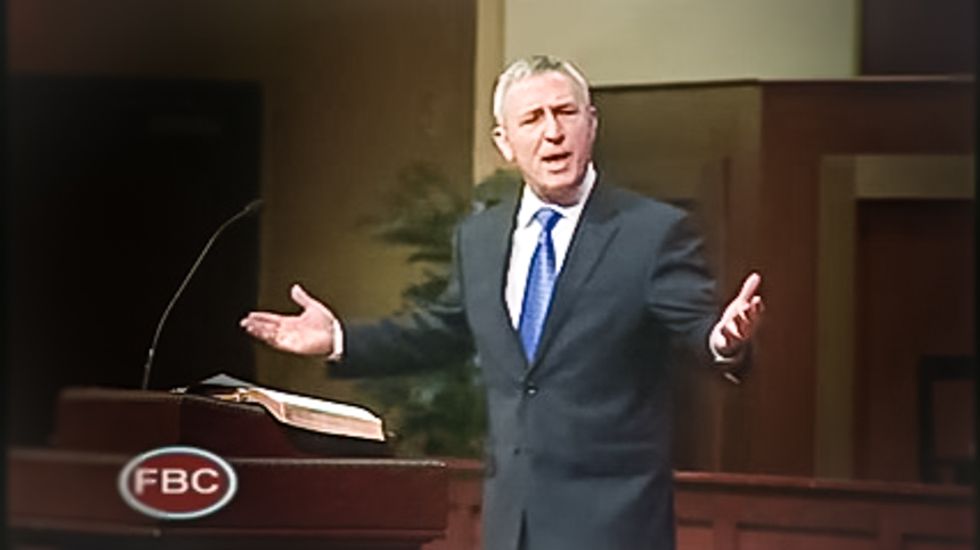 Dr. Craig Conner, senior pastor of the First Baptist Church of Panama City, threatened to stop paying taxes at the risk of being sentenced to jail if the federal government did not defund Planned Parenthood.

In his Sunday sermon, Conner argued that the federal government was spending $540 million a year to "fund this evil."

"Friend, that offends me," he explained. "And honestly, I was talking to the Lord about this just the other day and I said, 'Lord, I can't continue this.' You know if Planned Parenthood is not defunded, I just may stop paying taxes. I know that I'll go to jail for it."

"You want to talk about reducing the national debt?" Conner continued. "We could reduce it overnight if they would defund this evil organization and put it on the national debt. Man, we could get out of debt immediately."

The pastor did not explain how reducing Planned Parenthood's annual $540 million in federal funding would cover the over $18 trillion of total outstanding public debt.

"It must go because Planned Parenthood is to children what ISIS is to Christians," he noted. "It's an extreme threat."

According to Conner, God had released the recent undercover videos of Planned Parenthood officials talking about fetal tissue donations as the last chance for America to repent.

"I am no prophet but I believe with all of my heart and it's my personal opinion, God is the one that has revealed these videos to give America one more chance to repent of the infanticide that is happening in our country," Conner observed. "It wasn't men who came up with this idea to reveal what was going on. I believe God was the one that exposed it."

The Age of Trump empowered many "zombie ideas," both here in America and around the world. Fascism is the most dangerous of those zombie ideas. There is also the Big Lie that the 2020 Election was rigged or somehow stolen.

Donald Trump is no longer president, but zombie ideas continue to grow in number and force, devouring the unprepared or those who have left themselves vulnerable through carelessness or negligence or, in some cases, who are willing human sacrifices. America's democracy crisis is in many ways a story of zombie politics, about how lingering social, political, economic and other problems nourished an abomination that could no longer be easily denied or ignored.