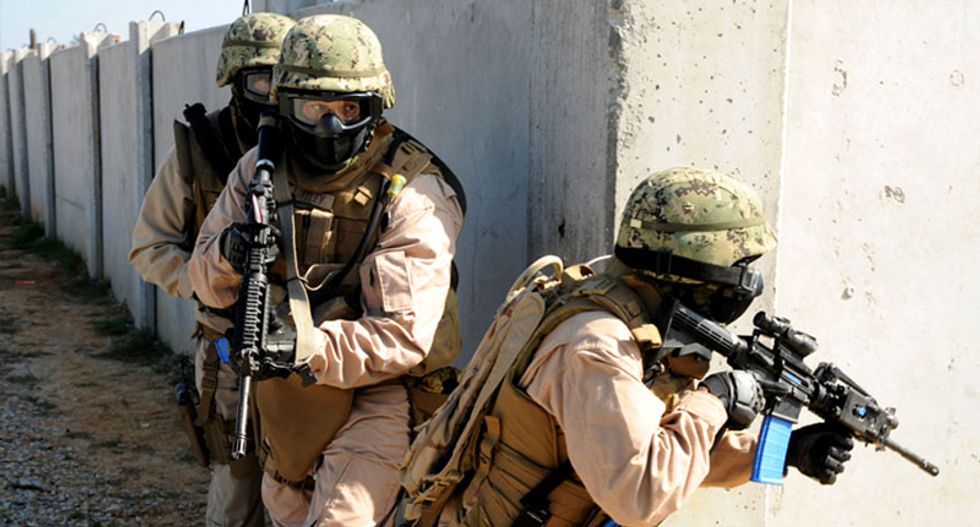 For the second time this week, a gunman opened fire at Camp Shelby, a military training center that is part of the "Jade Helm 15" training exercises, according to the Associated Press.

A man matching the same description as Tuesday's shooter, white and driving a red or maroon pickup truck, opened fire around 8 a.m. Wednesday, the Clarion-Ledger reports. There were no immediate reports of injuries.

On Tuesday, a gunman with the same description fired at two soldiers training at Camp Shelby. Two men were taken into custody and questioned, but were then released without charges, according to the paper.

The truck seen Tuesday had the words "broken arrow" on the windshield, according to the AP. "Broken arrow" is a military code requesting help when being overrun by enemy forces.

No one was injured Tuesday at the Joint Forces Training Center, located in Hattiesburg, Mississippi.

Jade Helm 15, a multi-state military training exercise, has sparked wild conspiracy theories that gained so much heated traction that the Pentagon had to publicly announce that it was not planning to invade Texas.

The fevered paranoia prompted civilians volunteers to act as "watchdogs." It was stoked, even by the admission of Fox News, by the likes of ultra-conservative politicians like Louie Gohmert (R-TX) who said, "When leaders within the current administration believe that major threats to the country include those who support the Constitution... patriotic Americans have reason to be concerned."

Texas Gov. Greg Abbott went so far as call in the Texas State Guard to monitor the exercises.