Fox & Friends panics over Target's non-gender specific toy labeling: 'I know it's going to confuse me' 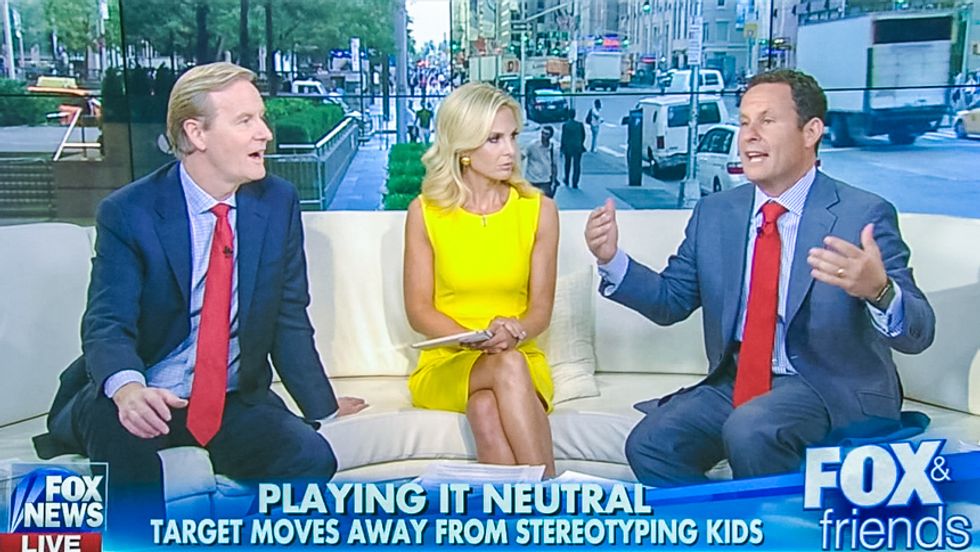 The hosts of Fox & Friends on Monday worried that they would have a difficult time shopping for children in the future because Target stores were eliminating gender labels from their toy aisles.

Target said last week that it would remove gender labeling from the toys section and some other areas in response to criticism on social media over separate labeling for "Building Sets" and "Girls Building Sets."

"They're going gender neutral, whatever that is," Fox News host Steve Doocy said while teasing an upcoming segment. "Have the PC police gone too far?"

Later, as co-host Elisabeth Hasselbeck was explaining the details of Target's plan to remove gender labeling, co-host Brian Kilmeade interrupted: "How do you do that?"

At that point, the hosts cut to a live report from a Target store where gender labels would be removed later in the day.

"Is this going to confuse you? I know it's going to confuse me," Alcides Segui of Fox affiliate WTVT laughed. "And they're doing it not only at this store here in Tampa but all Target stores across the country."

"How many times have you gone into a store -- when I go to buy glasses," Doocy remarked. "And all of them are up on the wall, I will ask the person, 'Are these men's or women's?'"

Hasselbeck, however, predicted that the signage would not be a problem for her children because they would "end up self sorting" the toys.

"But who are we helping?" Kilmeade wondered. "The nine people who are upset by this? If you go buy a gift for a boy who is nine or six or a girl who is nine or six, you want to be able to go to that section and pick out a toy they might want."

"Now you have to sit there and look at a blended area and wonder, 'Is this for a boy or a girl,'" he complained. "There's going to be some unhappy boys and unhappy girls now."