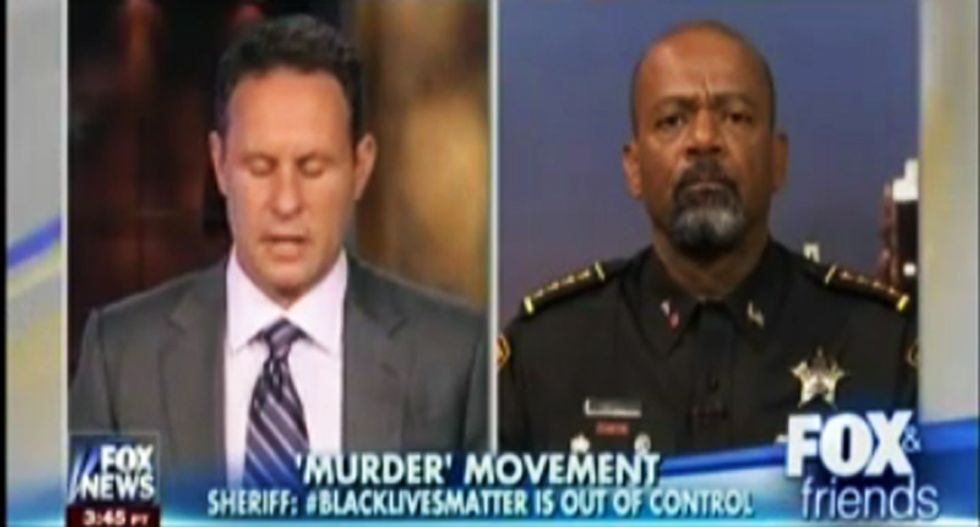 During a discussion on the shooting death of Texas Sheriff's Deputy Darren Goforth, the Fox News graphics department immediately led off with a chyron graphic identifying the Black Lives Matter movement as a "murder movement," reports Media Matters.

While no link has been established between the alleged gunman, Shannon Miles, and Black Lives Matter,  Clarke immediately attacked the group just a day after he accused President Obama of starting a "war on police."

"Well let me start here, first of all the headline is 'Black man shoots white defenseless police officer,' " Clarke said. "Because I get sick and tired of seeing it the other way around when an officer defends his life. They always point out that it's a white officer shooting an unarmed black suspect."

"It's time now for good law-abiding Americans to rise up like they did around that Chevron station --an outpouring -- but it can't just be symbolic. We now have to counter this slime, this filth coming out of these cop-haters," he said as clips of Black Lives Matters protesters rolled on screen.

Replying to Kilmeade, who suggested people believe attacks on the African American community by police is a pervasive problem, Clarke called it "a lie."

"If there is anything that needs to be straightened out in this country, it is the subculture that has risen out of the underclass in the American  ghetto," Clarke stated. "Fix the ghetto and you'll see a lesser need for assertive police officers, or policing in these areas, and then you'll see less confrontation. Stop trying to fix the police. Fix the ghetto."