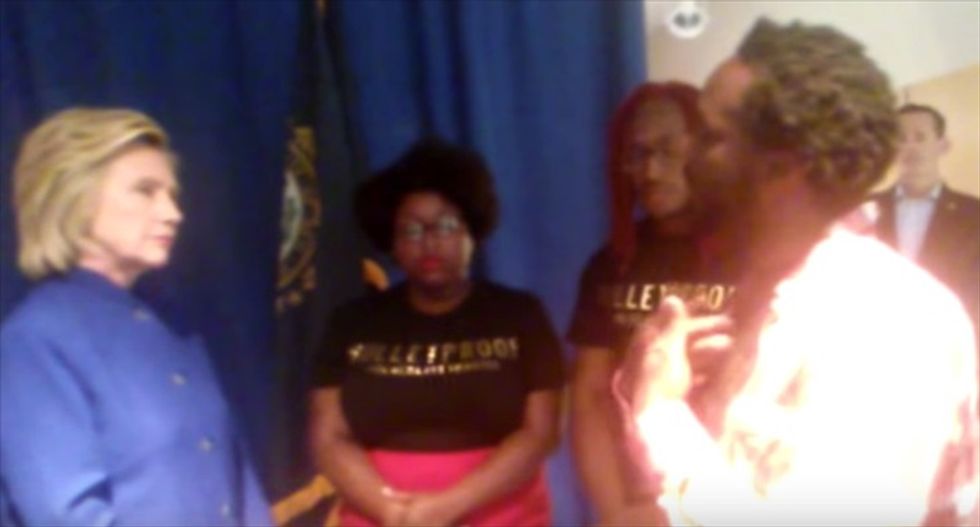 Members of the Black Lives Matter movement can be seen challenging former Secretary of State Hillary Clinton in footage from a meeting in New Hampshire last week that was published by GOOD magazine on Monday.

"I say this as respectfully as I can: if you don't tell black people what we need to do, then we won't tell you all what you need to do," one organizer, Julius Jones, tells her.

"What I mean to say is that this is and has always been a white problem of violence," Jones says. "There's not much that we can do to stop the violence against us."

While the video has the footage mistakenly listed as being filmed on April 11, the magazine stated that it was shot on Aug. 11, after the activists from the movement's Boston chapter were blocked from entering a Clinton event in Keene and instead taken to an "overflow room" to meet with her. The video was reportedly available on the group's YouTube account before being listed as private before being shown on MSNBC's Rachel Maddow Show on Monday night.

The footage was split into two installments. The first one can be seen here.

The second part can be seen here.

Update, 11:14 p.m. EST: MSNBC posted footage from the video, as well as an interview between guest host Melissa Harris-Perry and Jones and fellow organizer Daunasia Yancey.

"What we were looking for from Secretary Clinton was a reflection on her personal responsibility for being part of the cause of this problem, mass incarceration," Yancey told Harris-Perry. "Her response, targeting on policy, wasn't sufficient for us."

The interview can be seen below.