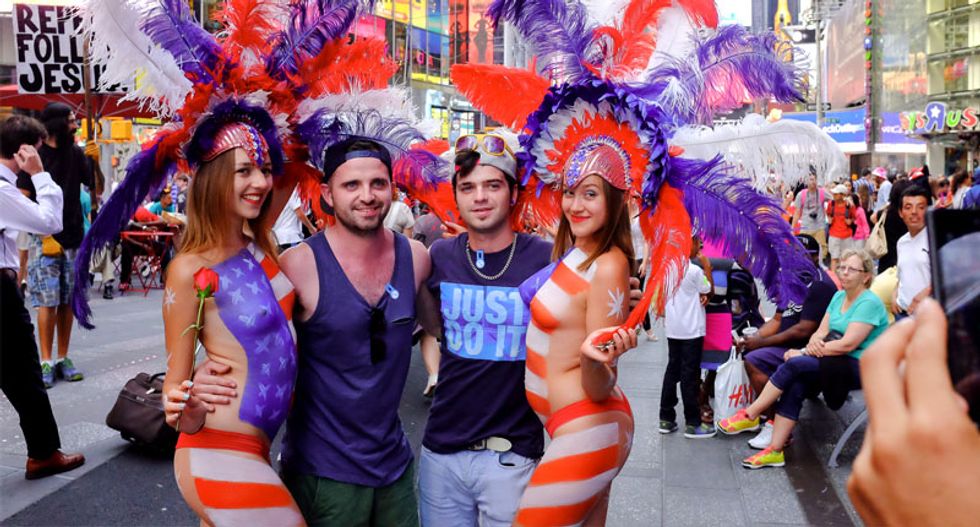 New York’s governor has joined calls by Mayor Bill de Blasio for a crackdown on topless women who work in Times Square.

Governor Andrew Cuomo on Wednesday said that he opposes the activities of the group of women – known as “desnudas”, the Spanish word for nude – who pose for photos while covered in little more than red, white and blue paint.

His comments echoed those of De Blasio, who said on Tuesday that he thought the activity was wrong and needed to be regulated.

“We are going to look for every appropriate way to regulate all activity that involves either begging, or asking people for a contribution based on, you know, the opportunity to take a picture, for example,” De Blasio said at a news conference. “I don’t like the situation in Times Square, and we’re going to address it in a very aggressive manner.”

Women have been allowed to go topless in New York since 1992, and these particular performers have been in Times Square since at least 2013 . They may also be protected under the first amendment’s free speech provisions.

On Wednesday afternoon, one woman clad in a red and blue lace-trimmed thong ignored questions from the Guardian, while media and public cameras, primarily operated by men, swarmed around her. One man approached her from behind, took a close-up photo of her backside, which was painted with the letters “NY”, and abruptly walked away.

A man sitting nearby, protecting her belongings, repeatedly said she would not do interviews.

Related: 'Welcome to Fear City' – the inside story of New York's civil war, 40 years on

On Wednesday, however, there were far more costumed street performers than topless women. The collection of superheroes and Elmos have been subject to increased scrutiny in recent years after a spate of aggressive incidents directed at tourists and police .

Tim Tompkins, president of the Times Square Alliance, told The New York Times that these characters frequently harass tourists in an effort to make money.

“This is happening thousands of times a week,” Tompkins said. “If I spend 10 minutes in Times Square, I will witness someone being deeply upset.”

Twelve jurors from Charlottesville and the surrounding area have been seated to render judgement on whether the organizers of the 2017 Unite the Right rally conspired to commit racially motivated violence in a federal trial.

The jurors were seated around noon on Wednesday after two and half days of questioning. The jury members, who will remain anonymous by the dictate of the court, include seven white people and five Black people. Eight are men and four are women.