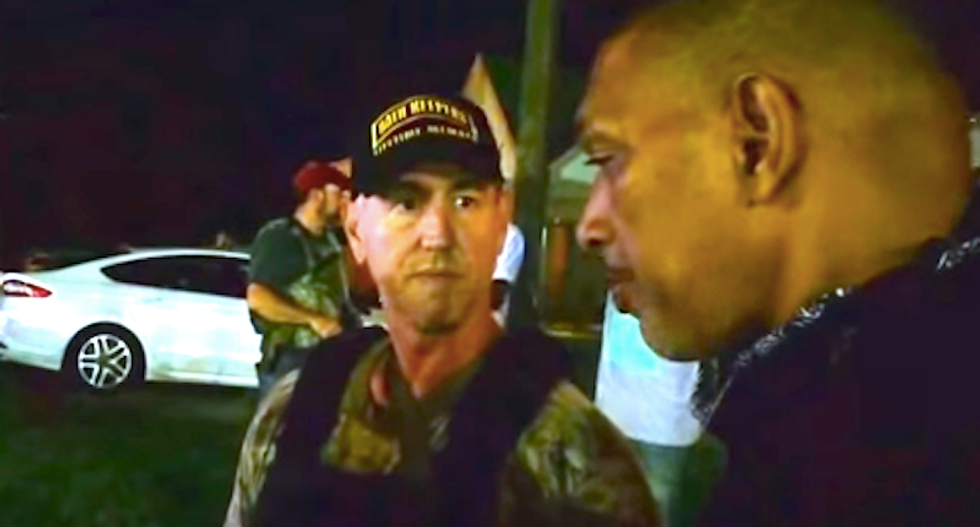 The gun-loving Oath Keepers plan to arm 50 black demonstrators with AR-15 rifles in Ferguson, Missouri, and basically dare police to shoot them.

The leader of the group's local chapter told Red Dirt Report that the event would likely be held before the end of this month to protest an order last week by law enforcement officers to Oath Keepers to put away their rifles while in city limits.

“Every person we talked to said if they carried they’d be shot by police," said Sam Andrews, head of the Oath Keepers chapter in St. Louis County. "That’s the reason we’re going to hold this event, and it will be a legal demonstration. I’m sick and tired of law enforcement who doesn’t think they have to abide by the law. They’re narcissistic and that guy (the county police chief) discredited my men.”

He said other Oath Keepers members would surround the black demonstrators as protection.

The anti-government group, which is primarily made up of current and former law enforcement and military personnel who have vowed not to enforce gun laws they believe are unconstitutional, patrolled city streets as protests marked the one-year anniversary of the police shooting of Michael Brown.

Group members told Reuters that they had traveled to Ferguson at the request of two reporters working for Alex Jones' Infowars.com, but those reporters have denied the request and police condemned their efforts.

“Their presence was both unnecessary and inflammatory,” said Jon Belmar, chief of St. Louis County police.

But Andrews said the Oath Keepers had broken no laws by openly carrying rifles during their patrols -- which he credits with restoring peace in the city.

“Before we got there, there had been 155 arrests and 57 shots fired," Andrews said. "Once we got there with the reporters, there was not another shot fired and no arrests. The same thing occurred the next night. We changed the dynamic in Ferguson.”

Andrews compared the planned open-carry demonstration to the raising of the American flag at Iwo Jima or Martin Luther King Jr.'s march on Washington, D.C.

"It will be an iconic event," he said.