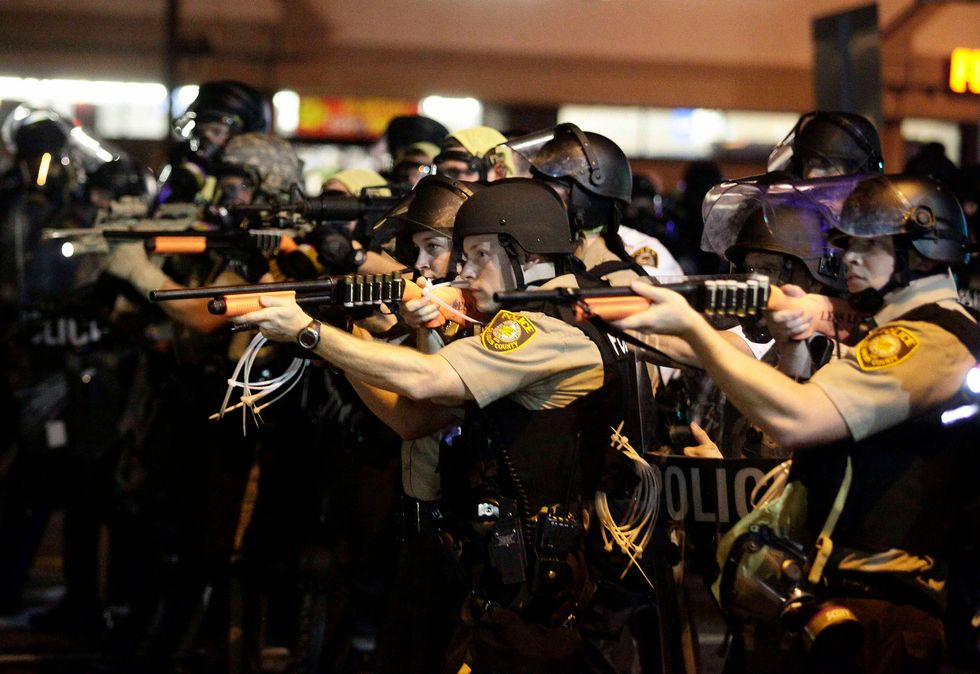 The shooting death of Michael Brown a year ago today sparked one of America's periodic 'National Conversations About Race' -- and racially discriminatory policing.

How could it not have, when Robert McCulloch, the prosecutor who presented the case against officer Darren Wilson, faced no repercussions after conceding that he had put obvious liars on the stand to corroborate Wilson's testimony?

Could we have avoided having a conversation about unarmed black men dying at the hands of police when Michael Brown's death was followed by the killings of Eric Garner, Tamir Rice, Freddie Gray, Walter Scott and so many others?

Could we have avoided that discussion after the Justice Department found that racially discriminatory policing was just part of the fabric of everyday life in Ferguson – when we learned that blacks are routinely hassled for the most minor infractions, and that the city relies on that harassment for a quarter of its revenue. (In 2013, almost 33,000 arrest warrants were issued in a city of 21,000 residents; more than half of the population of Ferguson have been served with non-vehicular citations.)

At least we talked about it, even if it didn't change much in Ferguson itself. This week, CNN reported that, “a year after the fatal shooting of Michael Brown sparked a firestorm in Ferguson, the city is still pumping out thousands of new arrest warrants and jailing people over minor offenses.”

And it has had some effect. Black Lives Matter activists are no longer allowing themselves to be taken for granted by anyone, including Democrats. Police agencies say they're under more scrutiny than ever before. A number of white police officers have been indicted for killing unarmed black men over the past year. And, according to Gallup, the share of white Americans who say they are “satisfied with the way blacks are treated in the US” has fallen from 67 percent in 2013 to 53 percent today; among Latinos, it's fallen from 61 percent to 44 percent.

But there was another conversation that we might have had, but didn't. We could have talked about the ways that discriminatory public policies of the past – legal, institutional racism at the local, state and federal levels – created concentrated pockets of poverty and despair in places like Ferguson.

They exist all across this country, but Ferguson is almost a perfect case-study.

It was actually written up in a detailed report by Richard Rothstein, a research associate at the Economic Policy Institute. In an interview conducted during the unrest that followed Brown's death, Rothstein told me, “the segregation that characterizes Ferguson, and that characterizes St. Louis, was the creation of purposeful public policy. We have a segregated nation by design.”

It was done primarily with two policies: First, public housing was segregated, purposely, by the federal government, so that what were previously somewhat integrated neighborhoods in urban areas were separated into separate black and white public housing projects.

And then, in the 1950s, as suburbs came to be developed, the federal government subsidized white residents of St. Louis to move to the suburbs, but effectively prohibited black residents from doing so. The federal government subsidized the construction of many, many subdivisions by requiring that bank loans for the builders be made on the condition that no homes be sold to blacks.

And then white residents in places like Ferguson came to associate slum conditions with African-Americans, not realizing that this was not a characteristic of the people themselves, but rather it was a creation of public policy.

The nearby suburb of Kirkwood was developed during this same period. At the time, houses went for an average of $8,000, or twice the median income. Most working people could afford to buy, and many were subsidized to do so through free loans under the GI Bill. Today, those houses are worth around $400,000, on average, or seven times the median income.

But blacks couldn't buy in Kirkwood. The government wouldn't guarantee their loans, and realtors risked losing their licenses if they sold a home on a white block to a black family. African Americans were forced into all-black enclaves, with bad municipal services and underfunded schools, and were unable to build up that same equity.

And it wasn't just housing. The St. Louis metropolitan area saw a massive construction boom during the postwar years, but blacks weren't allowed to join the construction unions so they missed out. “There are many other examples I could give you,” Rothstein told me. “During the enormous employment boom during World War II, St. Louis was a big center of arms manufacturing. Lots of workers flooded to St. Louis from the Ozarks and other areas, black workers as well as white workers. But the largest ammunition producer would not hire African-Americans until the war was almost over.”

The postwar years brought the “liberal consensus” period that so many progressives remember with great fondness. Prosperity was broadly shared, unions were thriving, CEOs weren't paid hundreds of times what their workers make and the wealthy paid a big chunk of their incomes in taxes.

We built a thriving middle class during that time, but it was largely a white middle class; blacks were excluded by law and by design.

Today, that kind of broadly shared prosperity is a thing of the past. And the racially discriminatory policies that kept African-Americans from climbing into the middle class during that time are all illegal.

But their legacy continues to limit African-American economic success to this day. These communities continue to have tax bases that can't support decent schools, and, more importantly, black families never got the same opportunity to build wealth, which is almost a prerequisite for success in today's highly unequal economy.

Accumulated wealth is the key to a family's ability to help the next generation get ahead. It allows people to help their kids get started – with college tuition, or a down-payment on a first home or some seed-money to start a business.

According to NYU sociologist Dalton Conley, author of Being Black, Living in the Red: Race, Wealth and Social Class in America, there are only two factors that appear to make any difference in terms of kids' performance in school and future prospects in the job market: Their parents' level of education and their household wealth. “Nothing else seems to matter,” he told me last year.

Conley found that the average white family has ten times the accumulated wealth as the average black family. Even poor white households — those hovering around the poverty line — have $10,000 or $15,000 in accumulated wealth, according to Conley. But “the typical black family at that income level will have zero net worth, or even negative net worth, which means they’re paying interest on top of all their other bills.”

If we had had this conversation – or if we ever have it – the utter bankruptcy of the charge that blacks are just “dwelling in the past” would be revealed for all to see. And calls for reparations would no longer be relegated to the fringe.

The reality is that African-American economic outcomes aren't hindered by some sort of “culture of poverty” – a crackpot idea that's remained popular despite having zero empirical support. African-Americans have only enjoyed full citizenship in this country for a half-century, and that's not nearly enough time to recover from four centuries of slavery and institutional racism. Black lives matter, but so does black opportunity.

Joshua Holland is a contributor to The Nation, and a writing fellow with the Investigative Fund at The Nation Institute. He is also the host of Politics and Reality Radio. Follow him on Twitter.