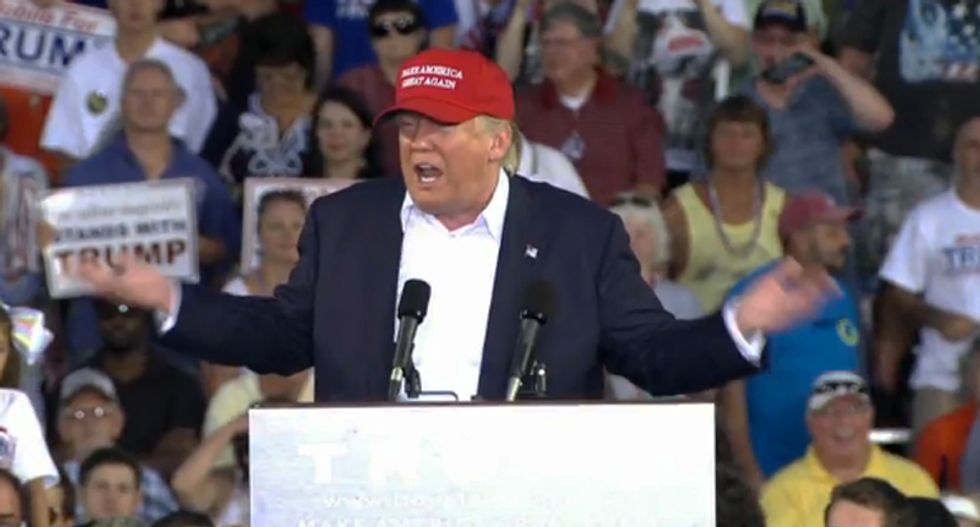 Republican pollster Frank Luntz peered into the GOP's id by questioning Donald Trump supporters about his appeal -- and he found the results terrifying.

"My legs are shaking," Luntz said.

The high-profile public opinion guru met with 29 past and present supporters of the real estate tycoon and reality TV star-turned-Republican presidential frontrunner to gain an understanding of their passion, reported Time.

“I think America is pissed," explained one man who participated in the focus group. "Trump’s the first person that came out and voiced exactly what everybody’s been saying all along. When he talks, deep down somewhere you’re going, ‘Holy crap, someone is thinking the same way I am.’”

Luntz asked participants when they first decided they liked Trump -- and many of them cited qualities that might sink other candidates.

“When Trump talks, it may not be presented in a pristine, PC way, but we’ve been having that crap pushed to us for the past 40 years,” said another man. “He’s saying what needs to be said.”

Trump announced his candidacy by slurring Mexican immigrants as criminals and rapists -- and he has since launched attacks against women, Black Lives Matter protesters and Fox News personalities and has proposed mass deportation and suggested the 14th Amendment is unconstitutional.

The candidate attacked Luntz, as well, after the pollster conducted a similar focus group following the first GOP debate earlier this month.

“@FrankLuntz is a low class slob who came to my office looking for consulting work and I had zero interest. Now he picks anti-Trump panels!” Trump tweeted at 3:28 a.m. the following morning.

The focus group participants -- who were each paid $100 and live in Washington, D.C., or in Maryland or Virginia -- complained that the U.S. was weaker and less safe than it had once been, and they believed Trump's bellicose rhetoric could right the nation's course.

“I used to sleep on my front porch with the door wide open, and now everyone has deadbolts,” one man said. “I believe the best days of the country are behind us.”

Participants also complained that they did not trust politicians from either party.

“We’ve got to show the Republicans that we’ve had it with them, that we will not be there every single time," one woman said. "They treat us like crap and they lie to us and promise us things and then they expect us to vote again. That’s why we want Trump.”

But supporters mostly explained that they found Trump's message -- which is pitched to a third-grade level -- appealing because it was easy to understand.

Luntz showed the participants recordings of Trump insulting women, bragging about himself and reversing his previous positions on a variety of topics -- but the vast majority said they only liked him more after watching the videos.

The pollster was breathless as he met with reporters who had watched the focus group from behind one-way mirrors, saying the findings were "significant" and mind-blowing, reported Time.

“This is real," Luntz said. "I’m having trouble processing it. Like, my legs are shaking.”

“I want to put the Republican leadership behind this mirror and let them see," he added. "They need to wake up. They don’t realize how the grassroots have abandoned them. Donald Trump is punishment to a Republican elite that wasn’t listening to their grassroots.”