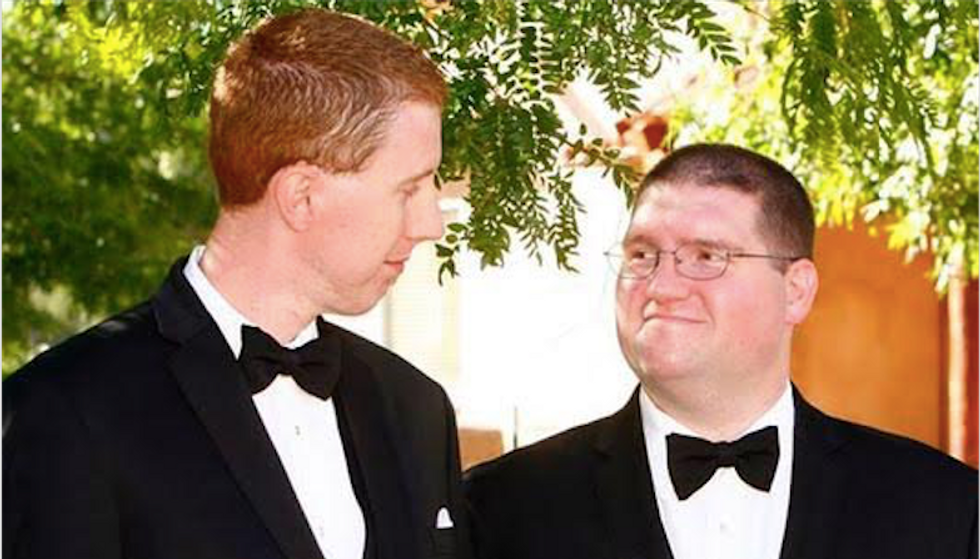 Image: Jay Stone, left, and James Hoskins on their wedding day in 2014 (Facebook.com)

The surviving partner of a gay Arkansas man whose funeral was leafletted by antigay Evangelical Christians is facing a final indignity after receiving a diagnosis of terminal cancer. The state of Texas is refusing to list John "Jay" Hoskins as surviving partner on his husband (Texas native James Stone)'s death certificate.

According to WFAA News 8, however, a U.S. District Judge has heard his case and is ordering two of Texas' top lawmen to appear on contempt of court charges for their refusal to acknowledge Hoskins and Stone's marriage.

Stone died in January in Arkansas, where Hoskins struggled to find a church that would hold the funeral and when he did, found himself confronted with anti-LGBT Evangelicals who handed him and Stone's mother Biblical tracts that told them that James has gone to Hell.

After the Supreme Court ordered all 50 states to recognize same-sex marriage in June, Hoskins sent a check for $46 to the state of Texas asking that Stone's death certificate be amended to indicate that Stone and Hoskins legally married at the time of Stone's death. The couple married in New Mexico in 2014.

On Wednesday, Judge Garcia received Hoskins' suit and within hours issued orders for the state to immediately issue Stone a new death certificate listing Hoskins as his husband and surviving partner.

"I think this is a big signal to state officials that they need to step into line," Lane said to Channel 8.

The motion alleged that Paxton and Cole’s refusal to issue the death certificate violated Garcia’s previous order enjoining state officials from enforcing Texas’ same-sex marriage ban, which he issued in the wake of the U.S. Supreme Court’s decision in Obergefell v. Hodges. …

“This is an effort to get political gain by persecuting gays and lesbians in the state of Texas,” Lane told the Observer shortly after filing the motion. “There’s just no other way to read what they’re doing.”

Six weeks after his husband's death, Hoskins was diagnosed with terminal cancer. He told the Observer that his doctors believe he currently has six to eight weeks left to live.

He has been completely unable to settle his affairs due to Texas' refusal to recognize his marriage.

Attorney General Paxton was indicted on charges of securities fraud earlier this week. His office told Channel 8 that it intends to contest the notion that states should recognize same-sex marriages retroactively, which will be adjudicated in a separate court case.