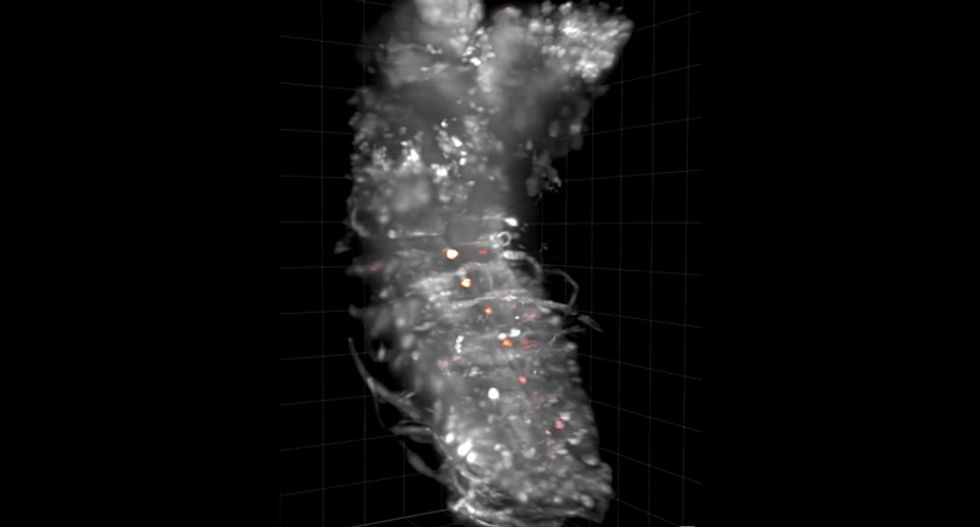 The neural activity of an entire central nervous system has been captured in a fairly complex animal for the first time.

The video footage shows neurons firing in the nervous system of a fruit fly larva, Drosophila melanogaster, as it crawls back and forth.

Scientists at the Howard Hughes Medical Institute in Ashburn, Virginia, imaged patterns of motor neuron activity in the organism as it crawled backwards and forwards.

The images were captured five times per second for up to an hour, at a resolution high enough to see single neurons firing.

“We are curious to see neural activity as behaviours are being produced,” said Philipp Keller, an author of the study in Nature Communications .

“By imaging different parts of the nervous system at the same time, we can see how behaviours are controlled and then build models of how it all works.”

The study advances on previous work which was limited to large scale imaging of tiny creatures, such as nematode worms, or to parts of more complex animals, such as the brains of zebrafish larvae.

The team measured the neural activity of the millimetre-long larva with a technique called light-sheet microscopy. The procedure illuminates the specimen with laser light from both sides, while twin cameras record images from the front and back. The scientists genetically modified the larva’s neurons to make them fluoresce when they fire.

Light-sheet microscopy produces two views of the specimen, usually its back and belly, which build up to produce high-resolution 3D images. They could help scientists understand how the brain and nerve cord interact to generate behaviour.

The work lays the foundations for further studies in fruit flies and larger organisms by providing a new method to image their entire central nervous systems in real time.

Science Video
Report typos and corrections to: corrections@rawstory.com.
Like this article ? Text `Support` to 50123 to donate.
READ COMMENTS - JOIN THE DISCUSSION